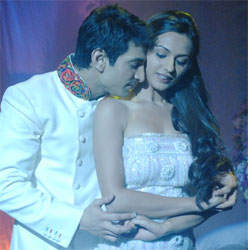 As we all know, both Salsa & Waltz are very romantic and sensuous forms of dance. Amit Jain who plays Shantanu Mehrotra and Priya Bhatija who plays Nandini Parikh in the show had to shoot a very intimate scene wherein Amit was expected to kiss Priya on her neck. Embarrassed & shy, Amit Jain at first refused to shoot the scene as he felt uncomfortable kissing someone on screen and getting intimate with his co-star. It took a good amount of time for the production house to convince Amit to shoot the scene, thereby delaying the shoot schedule.

Says Amit, "Both Priya & me were quite embarrassed and hesitant at first to do the kissing act in the show and I have never kissed any one on screen before which made me feel awkward. I belong to a family which is very Indian & reserved in their thinking & mindset, so I refused to shoot and asked the director to alter the sequence. To top it all, my co-star Priya is married which made things even difficult. My director and the creative producer from Sagar Arts came to me & after much thought, convinced me to do the sequence. Finally after an hour or so we resumed shoot as it was a very crucial sequence in the show".

Priya Bhatija Shah states, "Earlier we did not know that the sequence would require Amit to kiss me and get so close to me. I was hesitant as I felt uncomfortable doing the steps. Add to that the outfit which I was supposed to wear was kind of revealing and I became even more conscious thinking how my family and in-laws would react to the whole scene".

Director Naresh Malhotra quips, "Salsa is a very beautiful form of dance. It is best described as 'The Beauty of the moment'. It is actually a dream sequence in the show. Yes Amit & Priya were a bit hesitant initially but after making them understand the importance of the scene both of them agreed to do it and the sequence has actually come out as one of the best in the show".

Well Amit, all we can advice you is that you should take some kissing lessons from Bollywood's Emraan Hashmi...

'Gandi Baat' Fame Anveshi Jain On Not Being Worried About Any ...

ibelieveinpink 10 years ago it's called acting...suck it up and give the girl a peck! It's only the neck not the lips! But he's such a cutie!!!

d.y. 11 years ago they look lovely together cant wait to watch

BOND007BOND007 11 years ago amit i am with u,even if the whole world goes against u. LOVE U

pooja_l 11 years ago They are good frens but it may sometime happen that they may not be comfortable at some scenes...so its ok but at the end they did the scence, that shows that they are professional

meiskan 11 years ago they should be a bit more professional i think. I know some ppl would be hesitant to do these kinda scenes but thats part of the job!