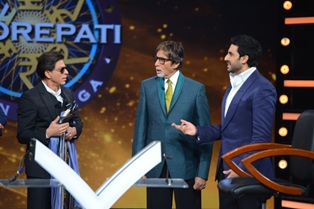 Not able to resist himself, SRK even picked up Mr. Bachchanâ€™s shirt to take away with him. When Abhishek highlighted the fact that it would be too big for him! SRK in his witty style replied that he will not give up on the shirt even if it means using it as a tent.

To catch this masti and more, tune into Kaun Banega Crorepati ,on Tuesday, Oct 21 at 8:30 only on Sony Entertainment Television

9 years ago U r King in all departments take care god bles u. Ra.1 and don.2 wil break all records!

+ 3
9 years ago You have the best Marketting sense and this is the good way to promote the movie.

9 years ago SRK you rock! love u Ra.one will b huge success

9 years ago wow...what a great way of marketing..I wish Ra.One and Jeevan would be a superduper hit...