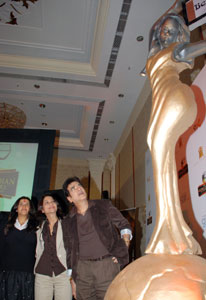 She flashed a smile for the shutterbugs but Ekta Kapoor couldn't hide her nervousness as she very clumsily held the pleats of her long flowing black and silver dotted skirt. And when the time came to "say a few words" about Balaji Telefilms' debut in instituting its very own television awards, she rattled off a written speech without looking even once at the audience. The K-soap queen was indeed very nervous.

Monday afternoon saw the launch of 'The Global Indian TV Honours' which will have its inaugural awards giving ceremony on February 1. There were Shobha and Jeetendra Kapoor, Indrani Mukerjea of 9X, the television partner 9X, jury member Neena Gupta, event organizers Moranis and Bunty Walia of GS Entertainment present at the meet. The press meet started fashionably late and when it did, it got over in 10 minutes flat after the mandatory 'We are so happy' speeches.

The event was rounded off by the unveiling of the award trophy which showed off a disproportionate woman posing rather oddly balancing a TV set on her shoulder. Knowing Balaji and their penchant for dramatic soaps, it would have been nicer to see a trophy of a woman shedding a tear with a spoonful of sindoor brightening her forehead. We caught up with Ekta for a brief chat. 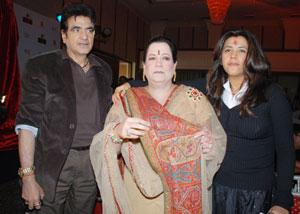 Why did you too decide to have your own awards?
We have a great partner in 9X and since Balaji was largely instrumental in changing the TV scene, we thought why not honour the contribution of the TV fraternity.

Shah Rukh Khan is going to perform for your ceremony…How did you manage to convince him?
We simply fell at his feet (laughs). Jokes aside, I was keen to have someone who rose from TV and is today such a huge superstar. Besides he returned to TV with Kaun Banega Crorepati, so it made great sense to have him with us.

Will Balaji too file their nominations?
No, we will leave it to the channels to take a call. Mujhme itni insaniyat aur sensibility hai ki I won't just make it a family or my company affair. The idea is to acknowledge the efforts of each and every production house, every actor, every technician, everyone who has contributed to TV. 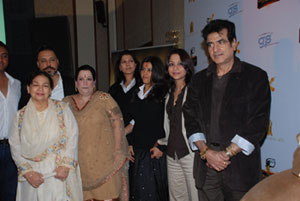 So it's possible that non-Balaji stars will have a chance to win the trophy?
(Smiles) Absolutely. I am aware of the talent around and the year gone by has only thrown up many other successful independent producers, actors etc…We respect that.

How fair will the judgment be?
Well, it will be as fair as it gets. Ernst and Young are our partners in this who will make all the tabulations and make the process smooth and fair.

Why have you called it 'global'?
Because we plan to eventually take the awards to different foreign countries.

Finally how is it going to be different from the existing award ceremonies?
It will be in the way it's presented for sure…

Malaika Arora Khan and Sajid Khan will host the event to be held at the Andheri Sports Complex. Ronit Roy, Prachi Desai, Jay Bhanushali, Shabbir Ahluwalia and Lara Dutta will be performing at the event.

Ekta has also promised that there would be some reality element at the awards, especially when it's telecast "and that's a secret between me and 9X". Smriti Iraani too will have a role to play at the awards, though it's not known if she will host a segment of the awards or perform there.
All Ekta says is "Yes, Smriti will be there."

+ 5
14 years ago YAY Smriti coming!!
thanks for this..sounds so interesting cant wait!

14 years ago Knowing what a rage Michi are, Ekta should ensure that Shabbir and Panchi perform together!!!!!

Wander if Rajeev and Iqbal will recieve invites?

+ 8
14 years ago I can bet she wont give any award to Rajeev though..Thankx for the article