History is all set to repeat itself! Once again, the Nach Baliye finale will be a close contest! With the best and the most determined dancers of this season, Aamir – Sanjeeda & Rakhi – Abhishek in the GRAND FINALE, even the judges cannot predict which Jodi will take the most prestigious NACH BALIYE 3 TROPHY home! 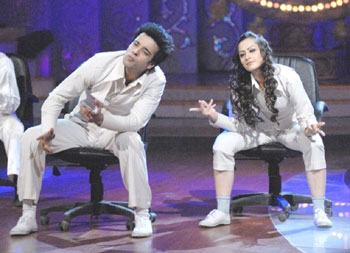 Featured Video
Adding to the Finale FACE-OFF between our 2 finalists, there will also be an electrifying performance by Shweta ‘Prerna’ Tiwari, maybe for the last time! This Aakhri Jung kick starts on Friday, December 21 @ 8 pm on Star Plus, so fasten your seatbelts as there is masala galore in the finale.

Not only our Jodis but the choreographers will also dance their way to success. The Choreographer’s Ki Jung will give the top 4 choreographers a chance to prove their mettle after weeks of being behind the scenes. 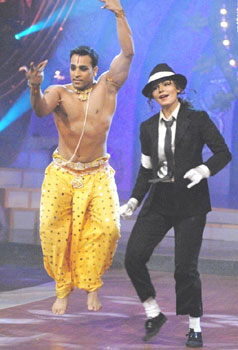 Our esteemed judges – Ishaa Koppikar, David Dhawan & Vaibhavi Merchant will decide who the best choreographer of them all is!

Also, watch out for the Dubai Jodi - Ms. Poonam Kateja and Mr. Hitesh Rajani’s special performance. For the duo, this is a once-in-a-life-time opportunity to perform in front of our esteemed judges, contestant Jodis as well as the lakhs of viewers of Nach Baliye 3!

The Finale on Saturday will witness the most fun – filled extravaganza. The entire Nach Baliye 3 family will be together again! Our very own judges – Ishaa Koppikar & ace choreographer Vaibhavi Merchant will be putting up special performances in their own unique styles. Our 8 ousted Jodis have also planned a series of exceptional performances in sheer celebration of Nach Baliye 3!

However, amidst all this fun & frolic, one question will still linger in everyone’s mind – Which Jodi has a better chance of bagging the glorious Nach Baliye trophy? In 14 grueling weeks, both Aamir – Sanjeeda & Rakhi – Abhishek have proved their dancing professes, so which one of them should go home with the stylish Chevrolet Optra?

Let’s take a look at their odds:

+ 2
14 years ago Need to ask Amar Singh how much do the bachans pay him for his services... looks like a Naukar to the bachans, neways who cares

+ 9
14 years ago Both are excellent jodis, but I want Aamir Sanjeeda to win, coz at the time they begin Aamir had not learned dancing earlier and not even a trained dancer, but he manged it so well, while Abhi and Rakhi are trained dancers, so it's not new for them....
I think NB3, to award them to excellance in dance from first til the last....

14 years ago aamir sanjeeda are so gonna win!well thats atleast what i hope! tfs

14 years ago i would vote for Aamir & Sanjeeda. they should win.

14 years ago Go Aamir and Sanjeeda.. You guys truly deserve to win....

14 years ago i vote for aamir sanjeeda. i hope they will got win.