With only three real colors in the world, the burden befalls on us to make the best out of them. Choices, dear friends, make the pallet look either stuff from the fairy tales or a horror movie's idea of confetti. With our celebrities racing towards fashion gates on all occasions, pulling out their best from the rest, it may not always be the right choice but not wrong as well.Thus BollyCurry rounds it up for you, the good and the bad color combinations our beguiling Bollywood divas stepped out in recently.
Vidya Balan 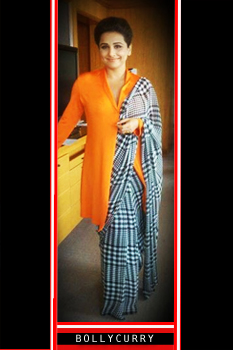 Vidya Balan considers her six yards the best of friends and why not when she has been known to pull off the Indian wear so effortlessly. With no doubt that Balan has a charming sense of style, the clothes themselves may sometime kill the effect with sublime ruthlessness. Attending a press conference for IIFA Awards in New York, Balan stepped out in a Satya Paul checkered print saree teamed up with a color pop orange jacket. The saree in itself screamed stolen table cloth and the jacket looked too much of an outsider, even if you do end up liking it separately. Contrasting colors have a permanent place in the fashion world but a word of caution to Balan, please do not try this at anyone's home! Verdict: Bad
Tamanna Bhatia 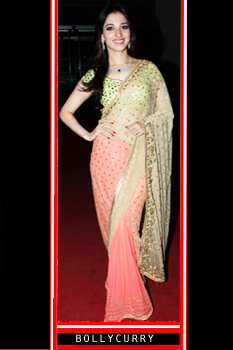 Tamanna Bhatia has been making her presence felt in Bollywood and we believe that she just might take the fashion circuit in a whirlwind too. The lovely actress was seen attending the GR8! Women Awards wearing an Arpita Mehta saree this past month. The florescent colors of peach and green might have looked garish if the designer had not chosen chiffon as the base, which made the colors seem more pastel while retaining the glow. The creation looked glorious on Bhatia and we hope the radiance added by her didn't cause any causalities. Verdict: Good
Kajol Devgn 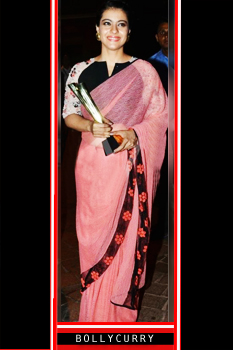 Once upon a time we could have never imagined Kajol even trying to follow a fashion trend, let alone look feminine and willowy. This tomboy lover has come a long way. But a little misses are allowed when you're learning the ropes. Kajol attended the Kelvinator Stree Shakti Women Achievers Awards wearing a crepe saree by Ilk. The fabric on a closer look gives you a stockings vibe though it was the color combination that made our heads turn. Pastel pink with black border and orange flowers was enough of experimental paint shop, but there came the blouse too with a different shade of black and off/dirty white sleeves with scattered orange-ish flowers. A lot going on for a simple saree we say. The disarray made the whole thing look a novice's work, but Kajol in her own persona looked really pretty. Verdict: Bad
Kangana Ranaut 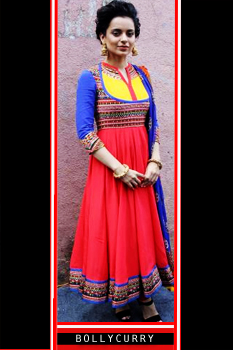 The named Queen of Bollywood, Kangana Ranaut had very long ago turned the tables in her favor when she took upon herself to revive her fashion sense. The result, we all have been seeing and mesmerized by. During the promotion spree of her movie Queen, Ranaut graced the sets of India's Got Talent wearing an anarkali suit from the Indian range by Manish Arora. Burnt orange, dark blue, florescent yellow and some gold thrown around adorned the ensemble. The effect was so refreshing you won't even question the busyness of the outfit. The colors complimented each other, not overbearing and definitely not killing the eyes of the lookers. And with Ranaut sashaying with confidence, there's no stopping this wonder. Verdict: Good
Tanisha Mukherjee 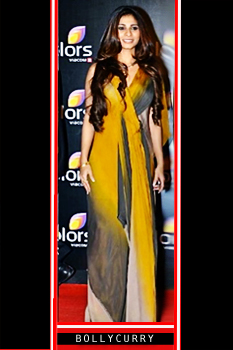 As pretty as Tanisha Mukherjee is, her indulgence in costume-party-mode-forever gets tiring sometimes to the eyes. Wearing a gown by Urvashi Kaur, Tanisha attended the Colors Party looking like a disheveled bridesmaid. The hanging hair with a doubling hanging dress gave a very distressed effect. The gown had too many layers with many different shades of grey and yellow. The colors clashed, looked ill thought of, with no real symmetry or pallet preference. What was worse were the visible stitches on the tug in and the hem. We heartily request Tanisha to enroll in the same fashion advisory classes elder sister Kajol has been attending. It is in the best interest for her and our well being. Verdict: Bad
Nargis Fakhri 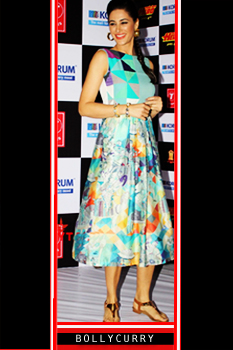 A lot could be said about Nargis Fakhri's fashion sense owning to the fact that she was a part of America's Top Model once and would know a thing more about vogues than mere humans do. Ms. Fakhri has noticeably been spotted in a more laid back style these past months throughout the promotions of her movie Main Tera Hero, and we are definitely not complaining. At one such event. Fakhri was seen wearing a Quirk Box dress in the shade of aquamarine. Fresh from the runway, this dress in frock style was all for quirks. The bodice geometric print design with the kitschy, vintage and symmetrical prints on the flair looked cute. The colors mingled well, aquamarine standing out but not overpowering the added pops, which made for a welcome change in the generally neutral summer. Verdict: Good
Ileana D'Cruz 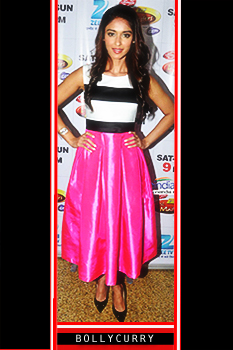 Ileana D'Cruz is one of Bollywood's noted actresses to have a skinny yet curvy silhouette. But lately her weight loss has been quite a matter of discussion. Spotted in a dress by The Source during the promotions of her movie Main Tera Hero, D'Cruz's look didn't make a mark on the fashion galore. The presentation fell flat, and when the outfit itself turns out to be garish, there was nothing we could be positive about. The bright pink on the shiny fabric pained the eyes and the bodice of black and white horizontal stripes looked out of place. The whole combination was out and out disgrace to any fashion house and we surely don't expect this from a known establishment. As for D'Cruz, with such an alluring personality, we advise that she considers to become more corporal soon. Verdict: Bad
Priyanka Chopra 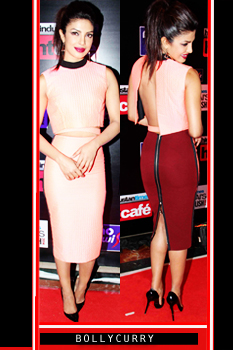 You love her, you hate her but you cannot ignore her. And between safe play and experimental combinations, one needs an eye like Ms.Chopra to choose something unique and a little unknown - to the Indian market at least. Priyanka Chopra was spotted wearing a Victoria Beckham dress at the HT Most Stylish Awards looking a cross between a dominatrix and a somber librarian. The peach of the dress was quite unique and the maroon at the back compliments the ensemble to perfection. Taking a moment away from her flawlessness, we'd like to applaud Mrs. Beckham's sense of creativity. Independent colors have been very rare for quite sometime in the fashion industry and seems like the new collection by Victoria Beckham is concentrating on bringing them back. Verdict: Good
Colors reflect our moods, define situations, distinguish nature and sire personalities. It is always advised to choose colors with care and not in haste, because the results could be both - fulfilling or uncanny to the T. Do let us know below whom you thought stood out as a true champion to the colors they chose.
Writer: Nabila S.
Editor(s): Marsh P. and Jenifer Y.
Graphics: Fizii.
Do you have a suggestion or comment for BollyCurry? Drop us a PM at  BC_Dropbox today.
12 Likes