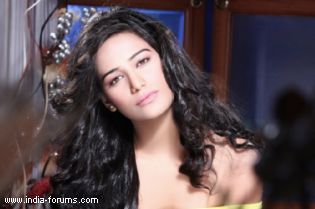 A slew of jokes by her followers and fans did the rounds online, and Poonam found the rush "unexpected".

"SERIOUSLY!!! didn't expected this #iHaveAjokeOnPoonamPandey is still TRENDING...Thankyou for Sooo much Love and Jokes on Meee (sic)," Poonam posted Tuesday.

The jokes were on since Monday, and Poonam has since then, been loving the attention.

"First Time in my life, am enjoying all the Jokes on Meee.. And reading dem all ... Crazzzyyy," she had tweeted.

Some of the jokes that were being circulated about her are:

* I have a joke on poonam pandey but it is too curvy ;) #iHaveAjokeOnPoonamPandey @iPoonampandey"

* Once Ranjnikant said "hi sexy..!!" to a girl.. That girl today is known as Poonam Pandey.. @iPoonampandey #iHaveAjokeOnPoonamPandey