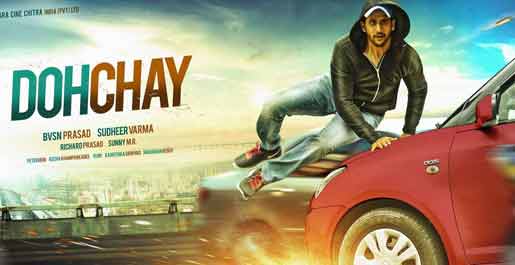 With a title like "Dohchay", which means 'to rob', you expect a movie to do more than just entertain. Such expectations were riding high on this film right from the moment it was announced, since it was coming from the director who gave Telugu audiences a sensational movie like "Swamy Ra Ra", which was a critical and commercial hit and opened the floodgates to a genre that was considered underrated.

Half way into "Dohchay", a crime comedy that doesn't do justice to both the genres, the high expectations are reduced to half, and by the end of the movie, you wish Sudheer had smartly worked on a sequel to his first film, which by the way, someone else is making.

The movie comes with the star baggage of Chaitanya, and though Sudheer has tried his best to not let it come in the way of the story, it does, and to some extent, makes the whole effort look like it was another attempt to please a star and cash in on his popularity. Maybe Sudheer wanted to use this opportunity to springboard into the big league of successful commercial directors.

The star baggage here refers to simple things like Chaitanya's lavish bike, which he rides with the earnings as a conman, and the luxurious apartment he lives in. It also refers to the need to cast a beautiful heroine, Kriti Sanon, even if it means she has no purpose. These were the compromises Sudheer didn't have to worry about in his first movie, but here, for having chosen to work with a star, it comes neatly wrapped with the big commercial tag.

The film opens with a bank robbery. Two guys rob a bank and escape in broad daylight. They create a diversion without much hassle to confuse the police and easily get away with the loot. One of them suggests they can easily double-cross their boss and flee with the money, but the other guy feels it's too risky. As they begin to argue, the story shifts to another location and introduces us to Chandu (Chaitanya), who easily cheats a producer and walks away with a lump sum amount.

For the next 45 minutes to one hour, we follow Chandu's story and learn what motivates him to con, and how good he's at it. In "Swamy Ra Ra", actor Nikhil and his gang of friends conned and robbed people for fun. Sudheer didn't bother telling us about their past or why they con, and why should it bother anyone as long as the movie entertains?

In "Dohchay", we're explained why Chandu cons people with a sentimental flashback and there's a trace of Shankar's "Gentleman" in the story. Now, there's some morality in Chandu's actions. From his earnings as a conman, he educates his sister and hopes to free his father from prison. The film suddenly feels like a revenge drama and Chandu's every action is justified.

Minutes before the interval, there's an excellent stretch that unfolds in an apartment where the two robbers from the first scene are still shown arguing. This scene is more reminiscent of a Quentin Tarantino film, and it is even more evident from the poster of "Pulp Fiction" in the room. On the adjacent wall, there's a poster of Nagarjuna's cult film "Siva".

Sudheer likes to pay tributes to his masters, and he does that so subtly. He uses the tongue-in-cheek humour quite well, but only at instances where he was running out of ideas and didn't have a clue how to proceed forward. Posani gets a meaty role and he plays it to the T. He plays a comic villain and succeeds in generating maximum laughter, and he's aptly supported by Brahmanandam in a cameo. The last 20 minutes provide some great rib-tickling entertainment.

It's tough to shake off the "Swamy Ra Ra" hangover in "Dohchay", which unfortunately fails to rob our hearts.