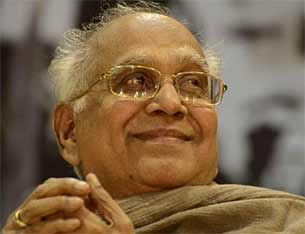 The industry members and eminent personalities from various walks of life made a beeline to pay their last respects to the thespian at Annapurna Studio, which he had founded in the 1960s to pave way for shifting of the Telugu film industry from Chennai.

Shooting and other filmmaking activities were suspended as a mark of respect to the icon.

Leading actors, filmmakers and other artists, leaders from various political parties and hundreds of fans poured in to pay their tributes. Some broke down while recalling their association with 'Natasamrat' as Nageswara Rao was known in film circles.

They were seen consoling his actor son Nagarjuna and other family members standing besides the casket.

The thespian, who was battling intestinal cancer for the last few months, breathed his last at a private hospital in the early hours of Wednesday. He was 89.

Actress-turned-politician Jayasudha broke down while recalling her association with the late actor.

In a career spanning over seven decades, Nageswara Rao acted in about 255 films and was the last of the first-generation actors of Telugu film industry, which produces the second largest number of films after Bollywood.