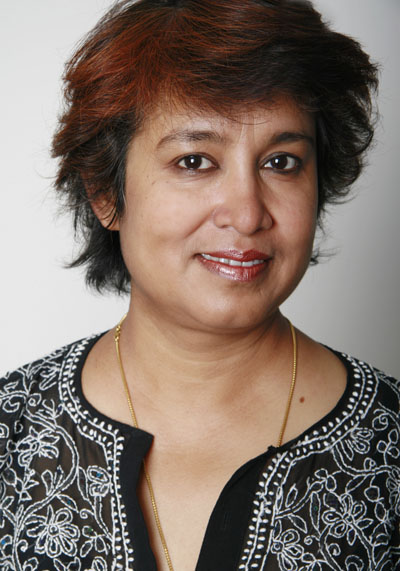 Foraying into television with the Bengali serial 'Dusahobas', based on her story, exiled Bangladeshi author Taslima Nasreen on Wednesday slammed certain serials for 'glorifying submissive women' and not portraying women in strong characters.

She felt the makers of such small screen ventures do not see women as figures of authority and emphasised 'Dusahobas' will portray women in strong roles, fighting against oppression and demanding their rights.

"Women are so decked up (in some Hindi and Bengali serials)...the way they are shown to serve their husbands, in-laws as if they are meant to do this.

"I think people, who are misogynist who see women in bad light probably, make these serials. They do not show women as doctors, engineers or philosophers...in majority of Hindi and Bengali serials, women are relegated to the role of housewives," she said.

The celebrated feminist writer rued that audiences are deprived of thought provoking content on the telly.

"I do not agree that one has to make serials according to what's popular with the audience. Why can't you give them the choice of something better? You can influence them and give them something better, which is thought provoking," said the author of controversial book 'Lajja'.

"Dusahobas" will be screened on Monday to Saturday at 10p.m. on Aakash Aath, beginning on December 19.

"I hope it will make the audience, including housewives, think. TV shows women being oppressed, but I will tell the tales of brave women who take stands."

zephyr29 6 years ago I couldn't agree more!
Today the trend is the shows might start off having strong characters but once they are married suddenly there's a 180 to their characterization and they turn into another meek, sacrificing wife/bahu seen in umpteen number of serials.

I wholeheartedly agree with this point of hers: "I do not agree that one has to make serials according to what's popular with the audience. "

Why aren't PHs/Channels brave enough to experiment with content and concepts today, rather than stick to tried and tested formulas saying this is what works?

First its this complacent mindset that has to change.

NaijaLuv88 6 years ago completely agree but being a housewife isn't a bad thing and doesn't necessarily mean a woman is always being submissive. the housewife is one of the most crucial role of any society and is the back bone.

but i agree that a variety of characters of female heroines should be shown on television. more and different portrayals of women being independent, confident, and daring it would be interesting and encouraging to see more of it.

dey.bh 6 years ago best of luck. this change was much required.

__smita__ 6 years ago though i hate most of the things she says..but loved this one..atlast taslima nasreen you said something good..

Debarati7 6 years ago Although she is right here..she always sounds as an extremist...the approach towards the matter here too is over the top..as are her books..I like her as writer...but dont appreciate her negative approach towards everything..

paagalbandar 6 years ago I agree with her...with latest serials like IPPKND, where pretty much every women in the show is being shown to be abused by their husbands is pathetic...what are you trying to say with crap like pati pujan...give me a break...who does that stuff in this day and age...husband like those should be jailed, not be tv characters

sandiab 6 years ago never heard of her before bt going to find out about her after reading the comments here. and i couldnt agree more its annoying watching these shows i cnt believe what i see half the time~the abuse; submissiveness and lack of confidence and lack of youthfulness is awful to watch. its so hard to find a strong woman that 1 can connect with on indian shows and whereas the male actors have amazing characters to play the female characters are all 1 dimensional and most times any1 can play these roles.

golpokobita 6 years ago Good to see Taslima Nasrin raising voice on this issue. There is no harm in choosing to be a housewife, what is wrong, the tv serials showing women only as housewives. If there is a careerist woman, in most cases, she is a vamp. Is this the real picture of India? I don't think so. Most Indian women are working women now. There are women who shine in various professions on the basis of talent, like doctors, engineers and others. When will these serials show the problems, issues, emotions of those women? They also fall in love, they can also be part of romantic shows!
Amyways, I wish Taslema all the best for her TV venture.

ChickenSoup 6 years ago She is a racist person who has no respect for any religion. her writings are just useless and biased. it's high time she needs to die.