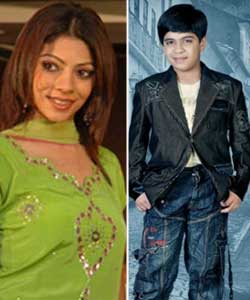 Tellybuzz exclusively reported about Hats Off's new show for Star Plus, Sasuma which is planning to launch in the near future with a bunch of new faces.

The show has already shot for its pilot but the latest buzz that has hit us states that Tanvi Thakkar who is currently playing a vital role in Imagine TV's Baba Aiso Varr Dhundo has been roped in for the show. On the other hand Jay Thakkar has been replaced even before the show went on air.

A source informs, "Tanvi Thakkar has been roped in by the production house to play Foram, the role which was earlier essayed by Prinal Oberoi. Due to the delayed venture she decided to quit the show. Another replacement was of Jay Thakkar popularly known as Shetji of Laagi Tujhse Lagan who got replaced by Manan."

Tanvi remained unavailable whereas Jay Thakkar's mother confirms, "Yes, actually the production house is great to work with but due to some personal issues I had to take back the project."

Sasuma team is trying their best to launch the show by next month at a prime time slot.

We hope this Sasuma is not as evil as the rest...

+ 4
9 years ago Oh God people are tired , they want SARABHAI VS SARABHAI 2 .. But hats off only will make nonsense dramas