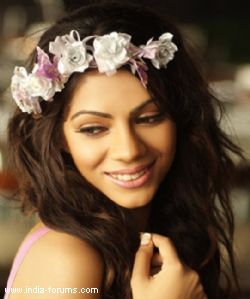 Tanvi Thakkar who was last seen in Balaji Telefilms' Sarvagunn Sampanna has bagged a Diwali bumper as she will soon be seen in not one, but two shows!!

First in the line is Balaji's newly launched show, Pyaar Kii Ye Ek Kahaani after which she will be seen in Yeh Ishq Haaye, both being Star One shows.

Confirming the news, Tanvi told TellyBuzz, "Yes, I am lucky that I am working without a break. I am thankful to Balaji for giving me a new show after Sarvagunn. I will play an important role in Pyaar Kii. I am also doing a cameo in Yeh Ishq Haaye which will be for 2-3 weeks. Both the characters are very different".

In Pyaar Kii, Tanvi plays the role of Maya and there is a lot of intrigue related to her character. There are few dark secrets in her life which will get unfolded later. She happens to be the hostel mate of Pia (Sukirti Khandpal) and will be seen wearing full length jackets to hide some bruise on her hand. In Yeh Ishq Haaye, she plays a grey shaded character of Priyanka who stays in the colony of Manjari (Srishty Rode). She has this big ego problem and thinks that she is the best dancer around.

Guess this is indeed a time to rejoice for Tanvi!!

10 years ago good luck in pkyek...hope she is a positive character...

Hmmm...more twists and turns in PKYEK. I hope she acts as a cupid for AbhIya!

+ 2
10 years ago oh cool for her...and hope she does well with both her shows

+ 2
10 years ago That's why ekta actors stay loyal to her she alway's has a show for them.

+ 6
10 years ago there shud be a show based on misha and kabir from pkyek!! they reali liven the show!! they shud come in a new show together!! and i like the other new show YIH!! =)

10 years ago I really dont know how Ekta going to manage all these characters. Its already crowded.