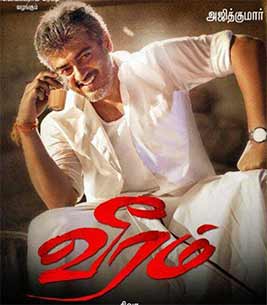 In a constant effort to churn out a commercially successful product, our filmmakers completely ignore the fact that entertainment is not about hero-worshiping.

"Veeram" is a classic example, which elevates Ajith and leaves the rest of the ensemble cast behind. It's a pity to see talented actors merely reduced to a few scenes while the newcomers hardly have any presence. The film is dedicated to Ajith, who is as charismatic as ever in his role. However, he is unfortunately not complemented by a strong screenplay.

Borrowing a storyline from several films of the 1990s in Tamil cinema, "Veeram" narrates the story of Vinayagam (Ajith), who single-handedly raised his four brothers and wouldn't hesitate to wield arms to protect them or even all the people close to him for that matter. But a situation forces him to lower his arms and swear to never raise them again.

The story, which has been milked dry over the years in Tamil filmdom, has hardly anything that could appeal to all the sections of the audience. It's a family entertainer with a lot of focus on violence. There's comedy and romance too, but we don't get to see anything different. While the comedy department is handed over to Santhanam, charming Tamannah takes over the reins of the romance division and flaunts it all in her rural avatar.

A rural feast, the film reflects the mood of the backdrop through its characters, their costumes and music. The rural setting has been pulled off in style and the team behind it deserves special credit for it because it's very important to get the right milieu for the audience to instantly create a connection.

It's an Ajith film from the word go. After playing back-to-back suave urban roles, he slips into the shoes of a rural character with ease and confidence. But there isn't a single actor who matches Ajith's performance that's worth of a mention. This is because besides him, no other actor has a strong screen presence.

Among other actors, Santhanam keeps the entertainment meter ticking with his humour.

While the first half is an attempt to keep the audience hooked with a lot of humour and romance, the latter half is plagued with violence, too much of it. Director Siva has strictly made "Veeram" for the fan-boys of Ajith, and it works in his favour.

"Veeram" translates to courage or powerful. But ironically the film isn't as powerful as much as Ajith's character is, and therefore, is powerless.