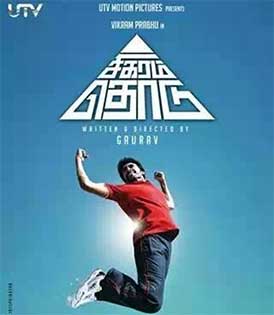 Dhanush's "Vella Illa Pattathari" was perhaps the last best commercially entertaining film in Tamil, and now Now, Gaurav's "Sigaram Thodu", which has its share of flaws, still deserves to be counted as the next best commercial entertainer. Filmmakers, who want to learn the art of making films for the masses, should not feel ashamed to take cue from these films.

"Sigaram Thodu" is a taut crime-thriller that gets neatly packaged in a family drama that focuses on the relationship between a doting ambitious father and his son. It also features a love track and adequate comedy that's used in a way that the core narrative is not disturbed.

Chellapa Pandian (Sathyaraj), who loses a leg while being on police duty, aspires to see his son Murali Pandian (Vikram Prabhu) don the khaki uniform. It's that dream that has kept him alive all these years. But Murali wants to settle down in a safe managerial job in a bank. He still pretends to be interested in becoming a policeman in front of his father as he doesn't want to disappoint him. Murali even applies for police training just to make his father happy.

Meanwhile, Murali falls in love with Ambujam (Monar), who too doesn't like a policeman for a husband. Murali is glad that he's found someone who equally hates the police's job as much as him. Unfortunately, he gets selected for police training, thanks to his father's friends in the department.

Amidst the family drama and romance, a slew of ATM thefts have given the local police sleepless nights. When the ATM robbers and Chellapa cross path, Murali's life changes forever.

While I agree a lot of time is spent on developing the father-son relationship and the romance, "Sigaram Thodu" somehow manages to appeal both as a thriller and a family entertainer. The film would've worked even better without these cinematic cliches, but these are a few things you can't skip in commercial cinema, according to the mindset of our filmmakers.

When you don't bother too much about the melodramatic father-son relationship, you'd be hooked by the ATM robbery. The detail with which Gaurav, who has also played an important role in the movie, explains the modus operandi of the robbers, is exemplary. It warns you to be extremely vigilant the next time you walk into an ATM.

Gaurav has put in a lot of effort in researching his subject and it's evident in the way he has made the film. In any other film, you'd find reasons that explain why the robbers are the way they are. But in "Sigaram Thodu", Gaurav has smartly avoided all that.

The cinematography and editing are the big plus points of the film. The film could've been shorter, but even with its current running time, editor K.L. Praveen keeps the proceedings exhilarating. His cuts are razor-sharp, while lensman Vijay Ulagnath's shots are amazing.

With three back-to-back films almost in the same genre, Vikram Prabhu is the best action hero Tamil cinema could possibly have today. He has also evolved as an actor in these three films and that's a good sign. Sathyaraj chips in with a surprisingly good performance as the loving father and the duty-fearing and patriotic former policeman.

I wished the robbers were more villainous -- that would have made the film darker and even more thrilling.