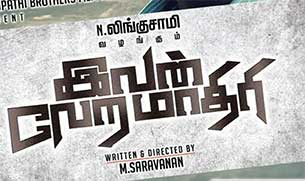 Usually, the rise of a common man against evil always results in violence and the immediate formation of an overnight leader. But our common man, played by Vikram Prabhu, is well read, comes from a decent middle class family, is currently job hunting and prefers to use brains over brawn when he has to handle a situation.

This common man is aware of the repercussions he might have to face for his actions and therefore always operates alone and in disguise. This is the story of an intelligent common man, someone you seldom see in society but are aware of his existence.

A barbaric act in a law college provoked by a local minister makes headlines which catch the attention of our hero, Guna, who at first hardly pays any attention and instead laughs at the comments posted on the video from the incident on his friend's Facebook wall.

Guna is constantly reminded of the incident over the next few days, forcing him to do the unthinkable, and results in the inevitable. He kidnaps the local minister's brother, Eeswaran, who has come out on parole and instigates the opposition party to accuse the minister of hiding his own brother. Following the disappearance of his brother, the minister is forced to resign and is arrested.

Having succeeded in putting the minister behind bars, Guna lets go of Eeswaran who sets out to seek revenge.

We have seen several stories of the common man turning into a hero and a leader in Tamil cinema, but this film, although confining itself to commercialism, tries something different. "Ivan Vera Mathiri" literally translates into "He is Different", and the film indeed is different. Sadly however, not to a great degree. As initially pointed out, it's intelligent but also has instances that make it look dumb.

The entire episode of Guna taking Eeswaran captive is intelligently executed, is engaging and makes you almost empathise with the latter's predicament. It's another story of good versus evil that's spared the cliched treatment but somewhere towards the end it gets sabotaged by a disturbing climax, especially scenes featuring Surabhi being kicked in the face and gut.

I wish the climax wasn't handled so recklessly.

Director Sarvanan uses some key characters aptly to push our protagonist to rise to the occasion following the incident in the opening scene. But what I fail to understand is how can just another average common man turn out to be a good fighter who could pull off some extremely dangerous stunt sequences with ease.

Here, the film's stunt choreographer Raja Sekhar deserves a special mention. The stunt atop an incomplete building definitely stands out and some road chase sequences also draw equal attention. The fights draw more attention than the music and acting put together while the cinematography at some junctures is good.

I don't know if Vikram Prabhu was forced to use the same expression from start to finish but his acting didn't quite convince. It's alright if it was done deliberately but if not, then I suggest he start working on his expressions because he hardly displays any variations in his performance. Vamsi Krishna as the baddie is aggressive and acts well while debutant Surabhi can be impressive with some guidance.

Ganesh's cameo is powerful but he has more talking than action in the role of a cop. I still don't understand why cops always have to yap about being good citizens? It's so cliched and yet our filmmakers fancy that idea.

"Ivan Vera Mathiri" is a fairly different tale of a common man.