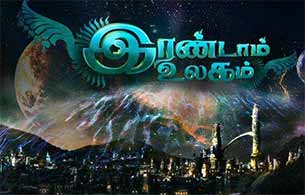 Selvaraghavan's fascination for romance has been evident since his maiden film and he has always approached it in his own style, contrary to how love stories have been captured on celluloid over the years.

All his love stories so far have been received well by audiences and have been lauded for maintaining realism in their portrayal. However, In "Irandam Ulagam", Selva complicates a simple love story in his attempt to merge romance and fantasy genres, only to give the audience an unbearable experience.

The film's tagline - 'how far will you travel for love', makes the audience believe that love can transcend time and space. That's an exciting premise for a love story, isn't it? "Irandam Ulagam" is indeed about a love story that traverses between two parallel worlds, simultaneously focusing on two couples, played by Arya and Anushka.

Selva is a genius and you can only acknowledge it when you keenly observe the reason behind his lead characters. In "Irandam Ulagam", he creates two extremely opposite characters played by Arya and Anushka. While Anushka is a simple girl with middle class aspirations in the real world, she plays an independent warrior in the alternate fantasy world with extreme hatred towards marriage.

The contradiction in the characters only points out that women are most independent when they are single and marriage weakens them.

Selva preaches love and he makes us realize that it comes with pain and separation even in an imaginary world. He reiterates that love remains pure even in a fantasy world, but human race is not and never will be.

"Irandam Ulagam" caters to a different set of the audience but not for the masses. It takes a viewer with higher intelligence to decipher what the story is all about and that's precisely why the film didn't receive the reception it had anticipated. I'm sure audiences like to be inspired but they definitely hate it when they're forced to understand why a film is the way it is.

The film, which is mostly filled with the presence of Arya and Anushka, is further ruined by an abstract and complicated screenplay. "Irandam Ulagam" was promoted as a visual splendour but it's not even close to being majestic.

There's a lot of difference between being colourful and painting colour in all the wrong places. "Irandam Ulagam" belongs to the second category and it mostly uses the same colour tones, found in every other scene. The visual experience definitely lacked the creative touch it deserved to have in the first place.

Here's another Tamil film that suffers due to a slow narrative that's neither arresting nor entertaining. Although Arya and Anushka put on a great show in roles far opposite to each other, they couldn't hold the film together.

We can't use budget as an excuse for bad visual effects. If budget is a constraint, it's best not to even try doing a shoddy job. Even "Eega", made on a smaller budget, produced better visual effects than what you see in "Irandam Ulagam".

Irrespective of its box office prospects, "Irandam Ulagam" will make Selva happy because it was his ambitious project. But the audience won't be spared as they will only get lost in translation trying to understand or even appreciate this film.