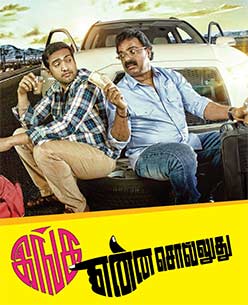 It's brave on the part of producer-turned-actor VTV Ganesh to play the lead in a film which is more or less a semi-autobiography based on events from his own life.

It is not because Ganesh plays the lead that "Inga Enna Solludhu" is unarguably boring, but because it is a shoddily written story that fails to entertain. Ganesh occupies the frame from the opening scene and with little honesty he proves that this project is very dear to him. But all this hardly matters to people who pay and watch a film for the sake of entertainment.

En route to Chennai in a car, Ganesh shares his story with the driver played by Santhanam. He talks about how he started his career as a bartender and went on to do multiple jobs before getting an opportunity to turn producer. If not every detail, most of this story could have been taken from Ganesh's life but the way it is narrated hardly makes one root for the protagonist.

It could very well be called a rags-to-riches tale of a successful producer who makes his own story look stupid on screen. Initially, Ganesh calls the film a dramatized version of true incidents but what he shows us on screen is outright awful as most of these incidents are so badly written, acted and executed.

I still fail to understand why Ganesh doesn't show us what actually made him a successful producer rather than focusing on how a series of bad decisions ruined his career. If it's a semi-autobiographical success story, why aren't there any inspiring events to convince us?

You cringe in your seat when you're exposed to the amount of perversion in the film. This is precisely where you lose the respect you had for Ganesh and start to wonder why he would resort to these cheap thrills to satisfy audiences.

Ganesh casts most of his industry friends in small roles in the film, and because of that we get to see some bad performances. Even the likes of Santhanam and Simbu aka Silambarasan (a popular Tamil actor) don't appeal because their roles are equally bad. Meera Jasmine and Andrea are merely used to fill in the shoes of weak characters.

Initially, we see a strong Meera standing up against a drunk cab driver who tries to misbehave with her but later we see her marry Ganesh for reasons never explained in the film. Likewise, we are never told how Ganesh and Simbu know each other and they appear in a scene out of the blue.

"Inga Enna Solludhu" is a story you feel sorry for. It's a film that makes a success story look like a joke on screen.

After Ten Months Jacqueline Fernandez has Finally Re-united ...
23 seconds ago

Kangana Slams Anushka for Raising her Voice Against ...
27 minutes ago

'RadhaKrishn' Fame Vaidehi Nair Roped in For 'Brahmarakshas ...
32 minutes ago