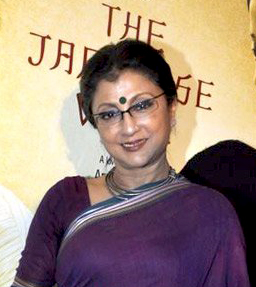 Her very first outing as an actress was under the guidance of master storyteller Satyajit Ray and now as one of India's finest and critically-acclaimed filmmakers, Aparna Sen believes in absorbing and retaining Ray's principles, but eventually doing "your own thing".

Be it "36, Chowringhee Lane", her outstanding directorial debut, or "Mr. and Mrs. Iyer" that saw her helm a love story in the backdrop of communal violence, or "The Japanese Wife", an international project, Sen's penchant for selectivity has appealed to the masses as well as classes.

And as a filmmaker in West Bengal, it's her experience that filmmakers can't simply distance themselves from Ray's legacy. But they can certainly put their own spin to it.

"I have been influenced a lot (by Ray)... all of it I have inherited in the sense that if you start making a film in Bengal you can't get away from Satyajit Ray. There's no way...," Sen told IANS in an interview.

She debuted as an actress in Ray's 1961 film "Teen Kanya" ("Three Daughters") based on three short stories by Rabindranath Tagore. The affable Sen weaved magic as a leading lady in mainstream Bengali films too.

She explains: "The structure of his script, his attention to details... all that influenced me but you know we (some of us) have to make a conscious effort to move away from that so that we don't become imitations of Satyajit Ray.

"So you have to take his spirit and then do your own thing," says the director who is receiving rave reviews from her peers as well as ordinary people for portraying a filmmaker in the Srijit Mukherji directed "Chotushkone" (The Quadrangle).

After reaping accolades in Bengal post its release Sep 26, the film was released Friday in select few Indian cities on popular demand. It opened in select theatres in Mumbai, Delhi, Pune, Bangalore and Hyderabad.

Revolving around four filmmakers who are each given the task to shoot a short film dealing with death, the intriguing "Chotushkone" involving sub-plots stars real-life directors Goutam Ghose, Parambrata Chatterjee and Chiranjeet Chakrabarty in the key roles.

"The fact that I am a director and I get to play that... I thought that was a great thing... it was interesting," says an excited Sen.

Affectionately addressed as 'Rina Di', the 69-year-old thinks "Chotushkone" should also appeal to non-Bengalis as there is "nothing culture specific about it". Incidentally, Konkona Sen-Sharma, her actress-daughter is yet to see the movie.

Balancing both worlds - acting and directing - with lan, the multiple National Award-winner (in addition to a host of national and international laurels), however, banks more on actors than stars.

"I find it really difficult (to work with stars)... I have bad luck with stars except for Rakhee Gulzar and Shabana Azmi," says Sen.

What also sets her apart is that her films, often dubbed as parallel cinema, set the cash registers ringing.

"Luckily they do well," quips Sen.

She is busy with her next directorial venture, a Bengali musical based on Shakespeare's Romeo and Juliet, set in the contemporary period.

But the versatile film personality has "no plans" to branch out into Hindi films although she recently made "Saari Raat", an 80-minute film based on playwright Badal Sircar's eponymous play for an India-Pakistan film festival.

As an artist in Bengal's film industry, she stresses on the need to make films that appeal to both the urban and rural audiences.

"One thing is it is very difficult to recover the money here. There is a great divide between district audiences and urban audiences. This could be bridged by more cinema halls. It will take time.

"Another thing is to make films that sort of appeals to everybody... that's a difficult proposition but we need to work on that," she adds.