He directed 'Asoka' with Shah Rukh Khan in the title role, but Santosh Sivan describes his new Hindi film, 'Tahan', as his first Bollywood entertainer.

The film, starring Rahul Bose and Anupam Kher, about Kashmir militancy was shot on location.

'Unlike my 'Terrorist', which was very blunt, 'Tahan' is my first Bollywood-style entertainer. It looks at the theme of terrorism in an entertaining and gripping manner,' Sivan told IANS.

However, currently he is riding high on the success of his English language film 'Before The Rains', which is wowing the international audience. 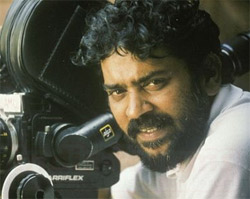 Set in the glorious greenery of Munnar in Kerala, the film about cultural cross-pollination stunned everyone by bagging three top awards at the Houston World-Fest International Film Festival, which concluded April 20.

However, the best music award has delighted the filmmaker the most. 'To me, personally winning awards isn't such a huge issue,' the shy cinematographer-filmmaker said after news of the triumph reached him.

'I've won five National Awards for cinematography and 12 in all. I'm happy 'Before The Rains' is being recognised internationally as a non-formula and non-Bollywood product. But I'm the happiest about Mark Kilian's award for best music in 'Before The Rains',' Sivan told IANS.

Set in the glorious greenery of Munnar in Kerala, the film is about cultural cross-pollination.

Kilian, who has done the music for such posh Hollywood films as 'Rendition' and 'The Bird Can't Fly', becomes the first non-Indian composer to be honoured internationally for an Indian film.

'We decided to get Mark Kilian to do the music in 'Before The Rains' because we didn't want a 'typical' soundtrack with strings, harmonies and ragas denoting the green stretches of Munnar. We wanted an element of the unexpected in the music.

'I personally thought Kilian's work gave my film an extra dimension. I shot the greenery in non-typical manner.'

'He did, but we shot 'Before The Rains' first, though it's yet to release in India. It's not easy to release an English-language Indian film in mainstream theatres,' said Sivan.

Having triumphed in Houston, 'Before The Rains' now opens commercially in New York this month and then goes to the prestigious Edinburgh Film Festival in June.

'It then goes for release to Britain, Australia, New Zealand and Russia. I suppose the film has now acquired a life of its own beyond the country of its origin and I'm happy to see it successful. I've moved on.'