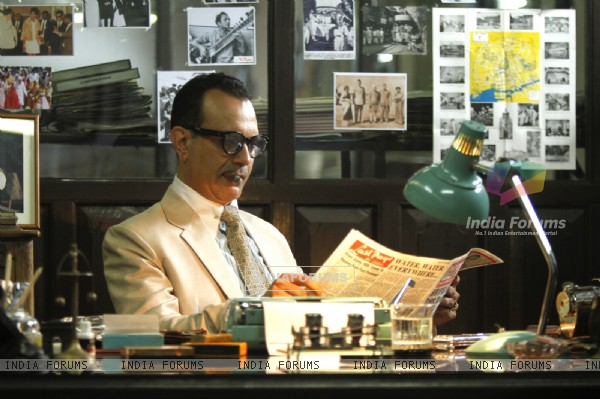 Anurag Kashyap's period drama Bombay Velvet is set in Bombay of the 60's. The director has recreated Bombay of that period. He has made sure that everything is in sync with the 60's, from the look of the characters, to the cars and the streets.

Tabloid journalism of that 1960's too plays a major part in Bombay Velvet. A tabloid called 'Glitz' is an important part of the film's narrative. This tabloid breaks sensational stories on the rich and famous of the city. It writes about the big and wealthy people of Bombay. It also talks about sting operations and blackmail stories that are a part of the narrative of the film. It is a well-known fact that 'Blitz' was a major tabloid in the 60's. It is India's first tabloid with Russi Karanjia as its editor. He is known as the man who pioneered tabloid journalism in India.

In the film, the role of the editor of Glitz is played by Manish Chaudhari. He plays a charismatic newspaper editor named Jimmy Mistry. Manish did a lot of research and preparation for his role. He visited Russi's closed up house in Cuffe Parade, went to his office and even spoke to Russi's colleagues.

Manish also met an 80 year old tailor working out of the ground floor of the former Blitz building. He shares, "He and his father made Russi's suits. His anecdotes and pictures, along with the other research, were my references. I hope Russi's family, friends and colleagues will enjoy Jimmy."

Bombay Velvet starring Ranbir Kapoor and Anushka Sharma is co-produced by Fox Star Studios and Phantom Films. It is one of the most awaited films this year.