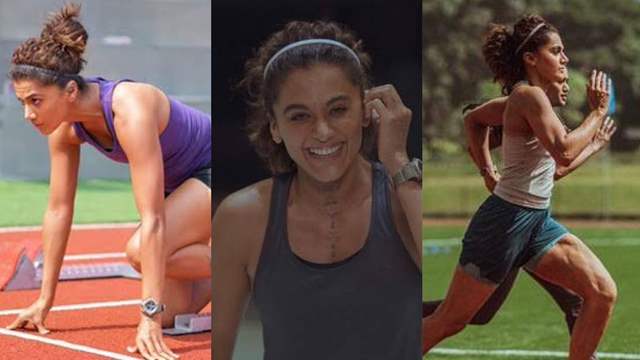 Actress Taapsee Pannu has proved her mettle with films like Thappad, Mulk, Pink among others. But every time she signs a new project, she takes up a new challenge.

Taapsee is currently gearing up for Rashmi Rocket and undergoing a rigorous training to play a sprinter on screen. The actress has shared her transformation journey and revealed how she did not take any steroids to build her body.

The video starts with Taapsee’s school memories when she won medals in sports. She shares that she ran for the first time in Class 1 and then went on to win a medal every time she ran on the sports day. “Maybe because I was a hyperactive kid but I was very competitive too,” she says.

Further, Taapsee also reveals that she decided on the first day that she will not take steroids to build her body and only wanted to build a natural, believable body.

She also says that since Rashmi Rocket is a female driven film, the team did not have the budget to touch up the body on screen to show sharper muscles but had to make it real and work on herself. She says, “I didn’t have the liberty being a female actor to sit at home while I build my muscle and get my body ready for the film, I had to do other films simultaneously. I was shooting for multiple other films while I was training for Rashmi Rocket.”

The narrative of Rashmi Rocket revolves around a Gujarati girl named Rashmi. She is a fast runner and which is why her fellow villagers call her 'Rocket'. Bhavesh Joshi Superhero actor Priyanshu Painyuli will play the role of Taapsee's on-screen husband in the film.