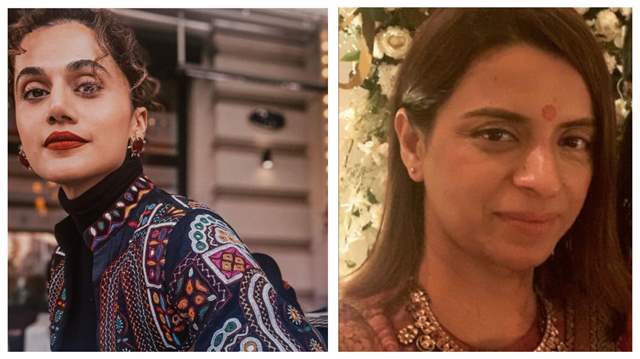 Every now and then, actor Kangana Ranaut and sister Rangoli Chandel manage to find their way into the news brigade in one way or another. While it has been quite a while since Ranaut hasn't been controversial with her comments, this time around sister Chandel made sure her opinion is heard and led to a controversy further.

Ranaut's feud with Taapsee Pannu is no secret where jabs have been taken at each other time and again for multiple things. Pannu just had a successful release in the form of Haseen Dilruba recently, which inspite of mixed reviews has been trending on Netflix for a while now. Chandel went on to give her opinion on how she felt that actor Aditi Rao Hydari would have been a better fit for the film as she is more 'feminine.' Now, Pannu reacted to the same in an interview with SpotboyE. She said, "Good that  I did  a character which has become aspirational for others.”

Commenting on Haseen Dilruba getting better reviews than mega Hollywood release, The Tomorrow War, she said,  “Hollywood hai na, sab chalta hai. It’s always aspirational regardless of the flaws. Yahan hum jitna marzi experiment kar le it always falls short and more, so we look “redundant” to them no matter what we do.”

We wonder if Chandel will have something to say to Pannu's comments now.

+ 3
22 days ago I don’t think Tapsee said anything wrong. People appreciated Centinel Man but when RaOne was made everyone criticised it so badly. Yes it had its flaws but it didn deserve the flak it got