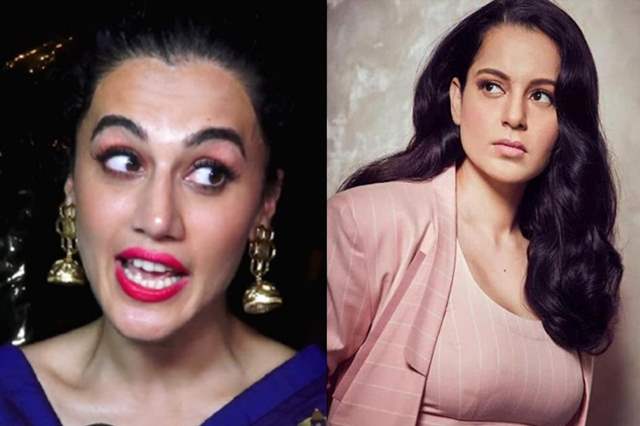 It wouldn't be another day passing by if it isn't for actor Kangana Ranaut being in news for her constantly explosive statements. As one knows, the actor was recently in yet another bare it all interview with Republic TV where she made all the statements about Karan Johar, 'movie mafia in Bollywood' and even taking a dig at actors like Swara Bhasker and Kangana Ranaut calling them "B-grade actresses."

She said, “For me, I have only to lose here (in Bollywood) because I know tomorrow they (movie mafia gangs) will get some 20 needy outsiders like Taapsee Pannu and Swara Bhasker, who will get up and say, ‘Oh, only Kangana has a problem with nepotism, but we love Karan Johar’. If you love Karan Johar, why you both are B-grade actresses? You are better looking than Alia Bhatt and Ananya Panday. You both are better actresses. Why don’t you get work? Your whole existence is proof of nepotism. What are you telling me how happy you are with the industry? So, I know this happens and the whole system will make me look like a mad person.”

In an at-length interview with Hindustan Times, Taapsee Pannu decided to address everything once and for all. First, she said, “It’s disheartening to see someone making a mockery out of outsiders and the industry that has given us so much. Imagine the parents whose kids are coming into the industry. What will they think of us? Like we are some nasty evil people sitting here to eat outsiders?”

On the whole 'I love Karan Johar' comment, she said, "I never mentioned anywhere I like Karan Johar or anyone she alleges, but I have never said I hate them either. So, the fact that you don’t hate someone she hates, is equivalent to ‘you like that person and you suck up to that person’? I don’t even know him behind formal ‘hi, hello, thank you’. How is this even logical?"

On Ranaut's claim of 'being better looking than Alia Bhatt and Ananya Panday yet 'needy outsiders', she said, "First of all I don’t think my existence has got anything to do with looks primarily. And, I have had my share of struggles and just because I don’t glorify them and deal with them with a positive outlook, doesn’t make me any less of the ‘outsider’. We all have had good and bad experiences, but many of us refuse to let negativity drive us. It’s our positive hope and the ability to make lemonade out of the lemons thrown at us that has gotten us to where we are. I am not going to give into this negativity and hatred because this limits my growth as a human being. Kangana has the right to have an opinion and so do I. And just because my opinion doesn’t match hers, doesn’t make me inferior."

On her 'Why Don't You Get Work' Question, she said, "In the last three years, I have been doing at least four films every year, and have five announced films right now. Who says I don’t get enough work? I decided to keep my career graph slow and steady and that’s exactly how it’s been going. Yes, I’ve been dropped out of films and replaced with star kids but the fact that Kangana and her sister (Rangoli Chandel) try to discredit me and my hard work, call me names, put wrong allegations on me, is actually an equal level of harassment, if not more. All this because I refuse to sing her tune and because I refuse to see her as the flag bearer of outsiders because we all are not bitter people?"

Ranaut said, 'Your Existence is a Proof of Nepotism', and to this, she said, "None of my past films have been produced by any of these mafia gangs Kangana keeps targeting and mentioning about, nor any of my future films are from them. So, how is my existence because of nepotism? Or undermining someone’s genuine achievements by crediting wrong sources, and then mocking, is how you prove that you are a true successful outsider?"

And finally, on her 'You say are happy with the industry' statement, she concluded, "I refuse to be bitter. I refuse to take advantage of someone’s death for personal vendetta and I refuse to make a mockery out of the industry that gave me bread and identity. As an actor who wants to speak up and address important issues that have happened with me which can help empower others, I did speak up when I was wrongfully replaced in Pati Patni Aur Woh. I called out a wrong practice and had the director of the film supporting me then. So, it’s not like I am scared to voice out problems and people do back you when you do it with the right intentions."

AmandaS 2 months ago I'm not Kangana's fan but I do think she has a point. Maybe it's how she articulates herself and sometimes she comes across as defensive which she would be from trying to defend herself all the time. Tapsee didn't have to answer, she could've kept it moving like everyone else. Unless she never lost to nepo kids. Also, I think some people misunderstood the 'B-grade' comment. Kangana thinks Tapsee is better than nepo kids but she's getting 'b-grade' quality work because better movies are for nepo kids.

MadhuHC 2 months ago Kangana is a hypocrite who is taking advantage of Sushant's death to settle her scores ... I just hate her.

PriyaRai101 2 months ago Swara and tapsee are bootlickers. They didn't see that Kangana praised them and tagged them as more deserving. They don't want to fight for the cause, they'd rather live on the crumbs that are thrown to them by bollywood biggies.

thesheowl101 2 months ago Tapsee Pannu and Swara Bhaskar are proof of Existence of Bullys in Bollywood outside the so called 'Movie Mafia'.

Payal Ghosh To File Official Complaint Against Anurag ...
16 minutes ago