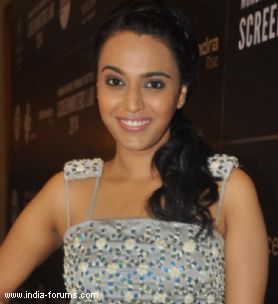 Actress Swara Bhaskar, who is busy shooting for "Nil Battey Sannaata" here, drew a crowd that recognised her as Bindiya of "Raanjhanaa".

Talking about the experience, Swara said in a statement: "Indeed, we have been repeatedly mobbed while shooting outdoors for the past few days. Agra crowds seem to be genuine cinema lovers as they are bearing the heat and police and the yelling of the crew to watch the shoot and take pictures."

"I think they are actually mobbing the camera! But then someone yelled 'Bindiya' and I felt gratified to know that it was not just the camera they were curious about," she added.

For the past few days, the crew has been shooting at outdoor locations in Agra, and battling the heat. But the heat has not stopped the enthusiastic onlookers and residents of the bylanes and areas of the Taj city.