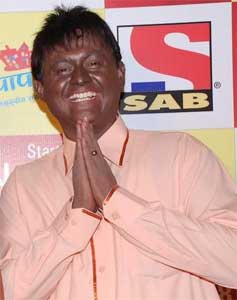 We have seen instances in real life wherein we fall into our own trap and get reprimanded for nothing!! And this is exactly what happened to the actors associated with SAB TV's recently launched show, Papad Pol – Shahbuddin Rathod ki Rangeen Duniya.

It so happened that the creative team decided to use Swapnil Joshi's personal car for a particular sequence in the show. Since the show has a backdrop of Gujarat, the number plate of the car was changed aptly and was used for the shoot. However, at the end of the day the unit members forgot to remove the temporary number plate, and this made way for some unnecessary mess.

Wondering how? Well, Swapnil after a hard day's work returned home with his car which had the temporary plate on, only to be stopped by the traffic police on the road.
There was a huge scene that happened on the road when the police demanded to see the papers of the car, which prompted Swapnil to enter the scenario.

TellyBuzz talked to Swapnil who was accommodative in sharing the incident with us. "Actually I had to get out of the car as my driver got into a problem with the traffic police, as the papers were not matching with the number plate that was on. It occurred to everyone after a few minutes of argument that we had the number plate of Gujarat on; it was a moment that I will never forget in my life. The police too had a hearty laugh when they got to know what had happened, and advised us to remove the plate immediately".

Even though he was put to a lot of embarrassment, the responsible citizen in Swapnil had a praise for the traffic police who was doing his job perfectly well. "The message coming out of this is that, never change the number plate of your car without carrying the proper papers (smiles). On a serious note, I was captivated to know that the traffic police men are so vigilant and keen on doing their work".

Guess Swapnil's popularity as an actor saved him on the day!!

It was scary as well as hilarious!!!!

Ishan. 10 years ago haha , lol that was scary as well as hilarious !

~*puja*~ 11 years ago Interesting awards ceremony... but if SRK arranged it, then who care, right?

CeruleanSky 11 years ago He won the Fun Fearless Male of ALL Time ..... *big grin*

sweet_angel27 11 years ago awesome what channel did they show this on?

Jenifer. 11 years ago oh, i wish they was a picture of sushmita