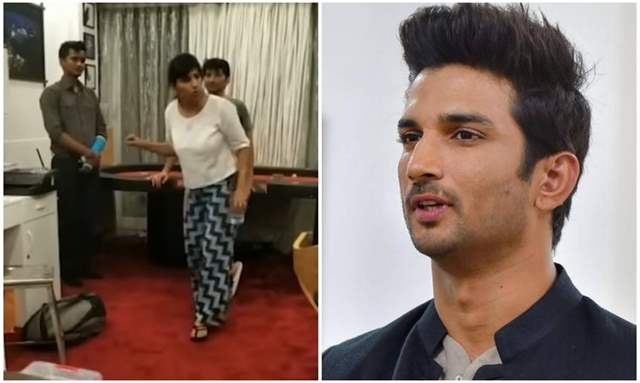 An old video of Sushant Singh Rajput’s sister Priyanka Singh has gone viral on the Internet. In the video, Priyanka can be heard questioning a house help over an alleged money transfer. Sushant’s brother in law Siddharth can be seen in the video as well.

India Today has shared the old video wherein Priyanka and her husband get furious and question the house help Rajat if any money was transferred to a person named Pankaj. As per reports, Pankaj was an ex-employee who was removed by the family.

Reportedly, Rajat used to handle Sushant’s finances until 2019. In the video, Priyanka threatens to call the police. “You are in a Bollywood star’s house,” she can be heard telling Rajat, in Hindi.

According to the report, the video was recorded back in April 2019. It is also reported that it was during that time when Priyanka and her husband Siddharth sacked Rajat “over some alleged transfer that happened to an ex-employee.” On the same day, Samuel Miranda was hired as Rajat’s replacement. Samuel has been named in the Patna FIR filed by Sushant’s father K K Singh, as well as in the CBI FIR and the Enforcement Directorate’s probe.

Recently, several questions were raised at Sushant’s relationship with his sister Priyanka. Sushant’s Rhea Chakraborty who has been a major name in his death case had recently leaked private chats with Sushant, about a fallout he’d had with Priyanka. In the messages, Sushant had written, (“To Priyanka”), “You do this, after the shameful act, making this a coverup to distract attention playing the victim card to the most non-negotiable act of molestation under the influence of alcohol...”

Later, Sushant’s sister Shweta Singh Kirti had shared a clip from an old interview where the late actor had said that he was closest to his sister Priyanka as ‘she gets him”

Sushant Singh Rajput died on June 14 2020. His untimely demise has stirred up a storm within the nation and his family and fans are fighting for justice to be served. Earlier what was termed as suicide is now being probed by the CBI.

"My favourite moment is of my own of the series, which is a ...
7 minutes ago

6 Iconic Dialogues Every True Mirzapur Fan would Use in Real ...
33 minutes ago