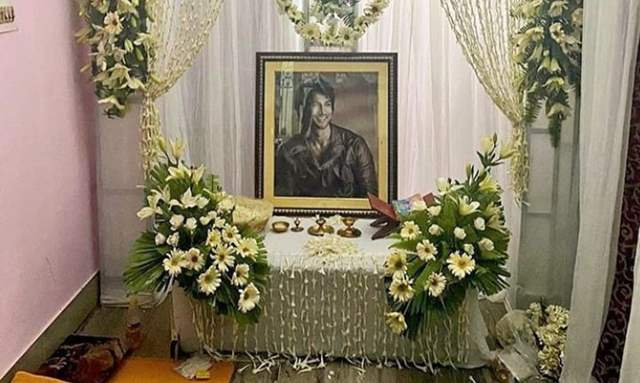 The entire nation is shocked by the untimely demise of Sushant Singh Rajput and fans are mourning the loss of a talented actor. Clearly, Sushant held a high pedestal in everyone's hearts including his friends and fans as well.

Apart from being a talented actor, the Chhichhore actor was a visionary, a bright and curious mind and was a National Physics Olympiad winner and seventh rank holder in All India Engineering Entrance Examination. Making a mark on the world with such an impeccable impression, Sushant intended to do more. He was also a good soul.

Now, the late actor’s family organized a prayer meeting in his hometown of Patna. A cheerful photograph of Sushant Singh Rajput was framed and adorned with flowers.

Sushant Singh Rajput was found dead at his Mumbai home on Sunday, at the age of 34. The police have said that he died by suicide and was depressed.

Earlier, Sushant’s last rites were performed in Mumbai over the weekend.

ehaab 4 months ago Heart breaking can’t believe he is 😭💔