View Profile
Here's the start to the perfect success story of actor Sushant Singh Rajput, who began his career as a TV actor in 2008 with Kis Desh Mein Hai Mera Dil, which led him to his more popular role of Manav from Pavitra Rishta, 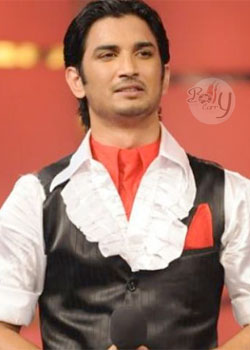 alongside bagging few other performances in the opening of the Commonwealth Games and Filmfare Awards - and Rajput continues to wow.  Are we looking at the star of tomorrow in the making? Indeed we are, but don't take our word for it! Take two of the largest production houses in Bollywood Cinema's word for it! That's correct, UTV and Yash Raj Films have Rajput at the very top of their list with exclusivity staring at the young star right in the face.
Chetan Bhagat's novel, The 3 Mistakes of My Life, marked Rajput's official transition to the big screen with UTV's film adaptation titled Kai Po Che earlier this year. However, his demand continued to expand when last month he was invited to discuss the usual prospective 3-film contract with Yash Raj Films.
Chopra was said to have immediately offered the Pavitra Rishta star a parallel lead with Arjun Kapoor in Aurangzeb, and further established a keen interest in making a full-fledged dance flick following Rajput's outstanding dance techniques in Jhalak Dikhlaa Jaa, and finally a third film would be kept in the pipeline for future potential.
Unfortunately for the young actor, who had previously signed a 2-film deal with his founder UTV, was obliged to fulfil his contract before aspiring to work with outside banners officially. According to UTV, a dear investment lay in the Chetan Bhagat adaptation and they have huge expectations for Rajput's movie career to take off in a grand way once his debut is released. But for the interim, he was not granted permission to sign any foreign contracts.
This, due to formalities, Rajput has faced the loss of his first Yash Raj offer for the film Aurangzeb, which was scheduled for shooting within the next few months. He has also faced the disadvantage of losing Mukesh and Mahesh Bhatt's Aashiqui 2, which has reportedly been offered to Aditya Roy Kapoor.
The latest amendment that has come about Rajput's recent career complications is that UTV has agreed to narrow down the actor's exclusive rights within certain time barriers. If, for any reason, the said production house fails to launch its second project after January 2013, Rajput will be at liberty to sign any further films without obligations. So the final question that remains by the end of all is whether Chopra is willing to wait for Rajput to complete his contract.
Sushant may be the superstar of tomorrow for the big screen, but for us he will always be the amazing actor who we watched as Preet and then as Manav, who went on to shake our screens with his mind-blowing dance routines and will forever be our superstar of today's small screen!
Editors: Shareen M. & Jenifer Y.
Graphics: Gurprit K.
40 Likes