Imagine TV's, Do Hanson Ka Jodaa that had begun with a promise, in between due to too much dramatic sequences couldn't connect with the audience well so now the Channel and Rajshri production house has decided to get back the old flavor back by getting into the roots and showing more of family sequences. 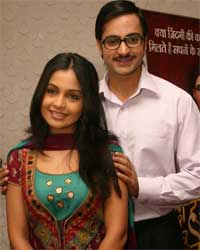 For the uninitiated, the present track televised that Preeti aka Shubhangi Aatre along with Pushkar aka Sachin Ohja has reached up to the semi-finals of the dance competition that she has participated to gain the price money for her sister in law Sajni.

But there is a twist that takes place prior to the final round.

A Little Birdie informed us that, "Pushkar wouldn't make it for the final performance due to some reasons and as the couple Preeti and Suryakamal aka Shaleen Bhanot have serious monitory crisis and can't quit the competition after getting so close, Suryakamal decides to perform with his wife."

Our source adds that, "Suryakamal and Preeti perform on a semi classical number in a vrindavan setup and they epitomize to be Radha and Kishan."

When contacted, Shaleen Bhanot confirmed the news saying, "Yes, it's a completely different performance and it was challenging for me because I had to dance as Suryakamal and not Shaleen but it was a real nice experience."

So as both Preeti and Suryakamal would be performing this act with a strong motive the chances of their failure sounds tentative but still we wish they achieve what they aspire.

Though the sequence that Pushkar won't be able to perform would be shown in tonight's episode but the finale dance episode would be aired on Monday.

+ 2
10 years ago I DON'T THINK THAT THIS SHOW HAS BEEN ABLE TO GIVE THE AUDIENCE WHAT WAS EXPECTED OF IT......DHKJ HAS NOT BEEN AS PROMISING AS IT USED TO APPEAR FROM THE PROMOS.........KASTURI WAS FAR MORE BETTER THAN THIS,I LOVED ROBBIE & KASTURI COMPLETELY WHEREAS SURYAKAMAL & PREETI LACK CHEMISTRY .....HOPE DHKJ ENDS AND KASTURI STARTS ALL OVER AGAIN. I LOVE ROKA

+ 2
10 years ago man this show sucks! kasturi was better than this yar!

+ 5
10 years ago i neva liked this show... they shud end it soon rather than dragging it on

neha.multaani 10 years ago dance performances doesn;t make a show a hit but its the story and performances... this show has neither of it now... it used to b a good show when it started... now its CRAP....

10 years ago initially i never missed a single episode,but the rona dhona has started getting on my nerves,i'v stopped watching it since last 2 months.

+ 2
10 years ago LIKE Daaa!!! Have guys seen Tujh Sang Preet Lagayi Sajana... they also copied from the movie.... i was just wondering if rab ne banedi jodi went on for another hours it would have ended up like the show.