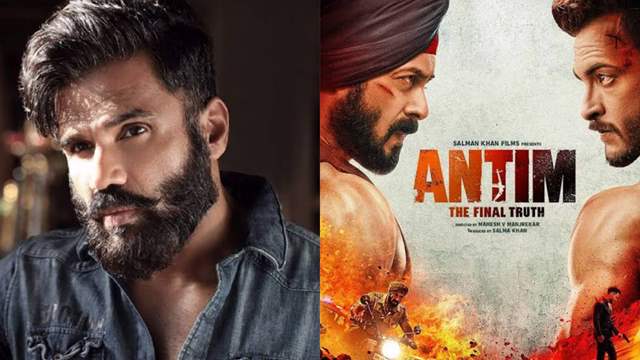 Sharing a poster on his Twitter handle, Shetty wrote,

‘#SunielShetty got a punch in the gut. What an ace from #Aayush Sharma. The boy is dynamite. A natural, set to make his mark. Superb performance by Ayush. What a show @BeingSalmanKhan #AntimTheFinalTruth. The truth hurts.'

This is the first time Salman and Aayush will be seen sharing the screen space in a film.

In a recent interview with a news portal, the young actor had revealed that he didn’t want Salman to be a part of the film.

He knew that there are going to be multiple notions about it including the fact that they are a family and that Salman is making this film to help him in his career and also to spark another conversation on nepotism.

The actor reportedly went to all the people in the family to convince Salman not to do it. It was also because the actor was doing something completely different from ‘LoveYatri’ and he was afraid he wouldn’t be able to match up to his hysteria in the film.

The film is an official adaptation of the Marathi film, ‘Mulshi Pattern'.

The Final Truth, Aayush plays a gangster named Rahuliya, a character that operates in shades of grey. While Salman plays Rajveer Singh a Sikh cop in the film .

The film also stars Mahima Makwana in a lead role. Helmed by Mahesh Manjrekar, produced by Salma Khan, and presented by Salman Khan Films, 'Antim' was released in theatres worldwide today on November 26.