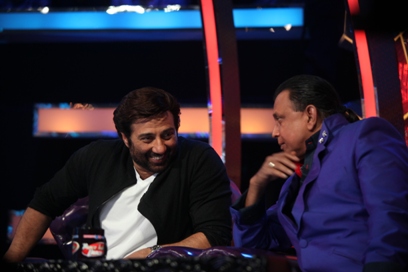 Sunny Deol, who has been the media's favorite punching bag for being a non-dancer, recently visited the sets of India's biggest dance reality show Dance India Dance to promote his upcoming movie, Singh Saab the Great and was floored and left speechless by the dancing talent he witnessed on the show.

Talking about the level of dancing on Dance India Dance, Sunny Deol said, "Dance India Dance is, doubtlessly, a great platform for dancers to showcase their talent. With the kind of performances I have seen today, I think in the next season, even I would need to give an audition in order to sit here as a celebrity judge. I feel blessed to be seated amongst the judges and judging such this super-talented lot of dancers."

While leaving, Sunny was approached by a contestant - Swarali, who requested him to dance with her on a romantic number. Meeting Sunny after a long time, Shruti told Dada that it was Sunny Deol who had given elder sis Vaibhavi Merchant her first break as a choreographer in the industry. Joining Sunny to promote the movie, was the Director of Singh Saab the Great, Mr. Anil Sharma.

Meeting his old friends and watching amazing talent, Sunny Deol was in great spirits when he bid adieu to the Dance India Dance team. Not just Sunny, but the entire DID family was equally appreciative of Sunny paaji visiting the sets. The audiences are surely in for a treat with all the fun and masti packed in this weekend's episode.

Anilaa 6 years ago Jay and MK was funny!..
Love Mudassar! :)