Sunil Godse who is seen as the very affectionate Tauji of Manav (Sushant Singh Rajput) in Balaji Telefilms' show on Zee TV, Pavitra Rishta will now be seen in Ekta's upcoming show on Imagine, Sarvagun Sampann. 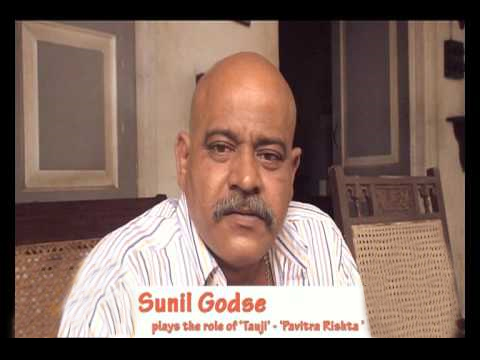 As reported earlier, the show is set in a political backdrop of Kolhapur. The patriarch of the political family, Sadanand Raja Deshmukh, played by Prasad Pandit has three sons, of which the eldest son is the male lead of the show. Nivedita Joshi Saraf will play the politician's wife.

Sunil Godse who is seen in a very positive role in Pavitra Rishta will yet again play a strong role in Sarvagun Sampann.

According to our source, "He plays the Personal Assistant to the politician, Sadanand Raja Deshmukh. His character name is Bhonsle. His is a very positive character, who is kind of right hand to the politician".

When contacted, Sunil Godse confirmed the news and said, "Yes, I am part of Sarvagun Sampann, and I play the PA to the political leader. I am starting shoot from today, so do not have much idea on how the role will go. But yes, mine is a positive and strong character".

Pooja Bose plays the main lead in the show, wherein she portrays the role of Swara who is a Lavni dancer. The male lead is not yet finalized.

Sarvagun Sampann is buzzed to take the 10.30 PM slot on Imagine, thus pushing Bandini to the 11 PM slot. However, a final confirmation on the slot of Sarvagun Sampann will be taken very soon. The show is expected to launch in the second week of May.

nikita_88 10 years ago What! Seriously They are pushing their luck here NDTV!

-Imu.M- 10 years ago
They should not touch Bandini's slot, it was pushed from 10PM and now from this too?

They will loose viewers like that!
But then again, Bandini has its own following,hopefully they will still follow it.

therockstar 10 years ago dont shift bandini to 11 pm as it will loss its loyal viewers instead put it back to 10 pm or keep it at 10 :30 pm and make this new show to air at 8 pm and shift kashi to weekend slot .it will prove good for the channel as @ 8 pm theres hardly any show to watch

Spartacus 10 years ago Way to go Kaka, the dashing kaka of Pavitra rishta!!!!!!!!

-SilverFlames- 10 years ago Why is Bandini timing changing? As if it isn't late as it is..!!
Bandini should go back to 10pm slot..

wherever he goes, the Deshmukh name doesn't wanna leave him lol

Chris Rock Jokes About Shooting for 'SNL' Premiere From ...
44 minutes ago

Karan Johar Breaks Silence: "I Do Not Consume Narcotics"; ...
46 minutes ago

Kangana Slams Anushka for Raising her Voice Against ...
2 hours ago