The story, set in Delhi, goes something like this:

Sehar's (Ayesha Takia) world turns topsy-turvy when she gets a clue about the missing Sunday in her life, pointing to a possible violent attack on her. Her fiance ACP Rajveer Randhava (Ajay Devgan) takes charge of the case and finds that on that particular Sunday different people interacted with her - any one of them could be the accused. 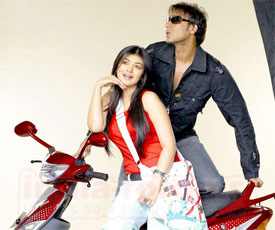 The list includes taxi driver Ballu (Arshad Warsi) and his friend Kumar (Irrfan Khan) who is a struggling National School of Drama actor.

Other people who fit into Rajveer's realm of suspicion include Sehar's close friend Ritu (Anjana Sukhani), a suspicious character living in Sehar's society.

The story becomes more complicated when Rajveer stumbles upon a murder case and the clues point to Sehar. She is terrified and tries hard but can't remember a thing.

Then another body is found. And the bracelet found near the corpse belongs to Sehar. The evidence is mounting and the needle of suspicion again points to Sehar.

And, still, she doesn't remember anything.

While Sehar struggles to remember the Sunday, Rajveer has to fight the fact that the woman he wants to marry might be a murderer and worse.

Shetty has teamed up with the best of the lot, but it doesn't guarantee success at the box office. Ajay's first release of the year - 'Halla Bol' plummeted at the box office, Arshad's 'Dhan Dhana Dhan Goal' too flopped and Irrfan's last release 'Aaja Nachle' was not a success story either.

Although 2007 ended on an excellent note with Aamir Khan's 'Taare Zameen Par' hitting the jackpot, no single release has been able to carry forward that success story. Perhaps 'Sunday' will break the dull spell at the box office.