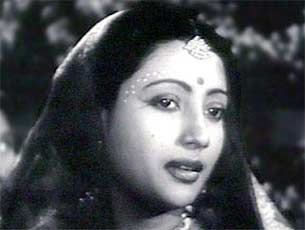 She enjoyed stardom like no one did in Bengali cinema. Yet, screen goddess Suchitra Sen let go of it easily, but stardom never left her mother, says Moon Moon Sen.

After ruling the silver screen for decades with Bengali films such as "Deep Jwele Jaai" and "Uttar Falguni" as well as Hindi movies like "Devdas", "Bombai Ka Babu", "Mamta" and "Aandhi", Suchitra quit acting because of "kitschy mediocrity" that overtook Bengali cinema in the 1970s and 1980s.

Post retirement, she lived a hermit's life for three-and-a-half decades and shunned everything - from arclights to socialising. In fact, she was so determined that in 2005 she even turned down the Dadasaheb Phalke Award, the highest honour in Indian cinema, as she would have had to come out of her seclusion to collect the honour in person from the president.

However, her daughter is quick to clear this: "It's a myth that she didn't meet people. She met everyone she had to and was extremely polite and easy going in her social interactions."

"One reason why she quit acting in the 1970s was the kitschy mediocrity that overtook Bengali cinema in the 1970s and 1980s. Many of the directors she knew well and felt comfortable working with, passed away. The scripts that were offered to her were awful," said Moon Moon, who also stepped into the world of acting.

Suchitra, who featured in 52 Bengali and seven Hindi films during a 26-year acting career, formed the greatest romantic pair in the regional language's history with the legendary Uttam Kumar.

Moon Moon recalled: "When Uttam Kumar passed away, she'd say, 'Whom am I going to work with?' Once she left acting, she left it behind completely.

"When I started acting she would hardly ask about the film industry except maybe an odd question about how Gulzar saab was doing. She was extremely fond of him. Otherwise she was totally out of cinema both Bengali and Hindi. She let her stardom go quite easily. But stardom never let go of her."

People were always open to work with the senior Sen.

"I remember I was on a flight with Andhra Pradesh's eminent producer D. Rama Naidu. He said to me, 'Tell your mother I've a blank cheque waiting for your mother whenever she decides to work with me.' And Salim Khan saab told me she refused Yash Chopra's 'Deewaar'. After she opted out, they changed the whole script.

"I think she missed the company of like-minded people. She had me and her aunts, sisters, nieces and very few friends," said the daughter, who plans to pen a coffee table book on her mother.

Suchitra had a fierce temper, which my daughters (Raima and Riya) and I have inherited," says Moon Moon, adding that she was "very choosy about her friends and a stickler for punctuality".

"If anything didn't go well while shooting my mother would be extremely upset and would make no effort to hide it. That's because she was very particular about the quality of her work," she said.