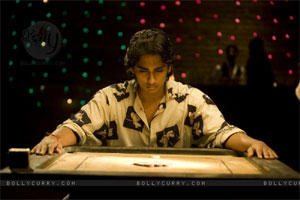 Striker is the story of Mumbai's ghetto life told to us by Surya (Siddharth) the youngest of three kids from a lower income family. It shows his childhood, the way he grew up surrounded by grime always, both literally and figuratively. When Surya misses school due to illness for as long as five months, they refuse to take him back in. So to beat the boredom he fiddles with the carom board. Elder brother Chandrakant (Anup Soni) helps him learn the game finely. Surya goes on to win the junior carom championship but that's the highest accomplishment he makes in this sport. He gives up the game to be a serious earning member of the family. However, things change for bad when Surya loses all his money to a bogus agent who'd promised to get him a Dubai job!

This is what takes Surya back to the carom board, but this time for gambling. He is only egged on by his hare-brained cocaine sniffing best buddy Zaid(Ankur Vikal). The pressure of making money so he can contribute to his sister's wedding makes the hustling scene more appealing to Surya. This brings Surya to face the dreadful gangster Jaleel (Aditya Panscholi) who he was careful to keep his distance from, after he had witnessed his wickedness once. This is what the story basically is about. However, what becomes a part of this is the '92 riots and what it did to a Hindu guy with a Muslim best friend.

The film is not for the weak hearted. Everything seems like some concentrated concoction. Starting from the ghetto. It seems very real. Now we know that's a real portrayal of the underbelly of the city. But somehow seeing it on celluloid which has mostly fed us with glamour, makes it unpalatable at times. Ugh! Truth is bitter!!

The dialogues are embarrassingly explicit at times. Can make you cringe. The film is utterly baffling at one point. I guess to leave you clueless means to keep you wondering in turn to make a film all the more interesting. There's a rape scene thrown in to give you the goosebumps. And a skull-squelching scene to add to the already high shock value.

The film is very smoky like the meeting rooms of the mafia. So smoky it can get the insides of your head clouded.

The scenes between Surya and Noorie (Nicolette Bird) during their very short-lived romance is sweet and at times funny. The maximum comic relief is given by Zaid with his uber-cool attitude to gut-wrenching, dangerous situations. It was very very warm to see most of the females in the film with very little or no make-up. That and the gritty locales add to the genuineness of the film. The friendship between Surya and Zaid is to die for.

Maybe because the producer-director Chandan Arora has had a lot of hands on experience on editing, the film has come out clean cut! At times you may feel like this scene is taking forever but it goes along with the whole old-world storytelling pace of the story.

Music is nice. The song Raat ke chingari is one you can play on repeat.

Siddharth has proved that he is capable enough to carry a Bollywood film just on his shoulders. He has tried hard truly to get into the skin of his character Surya. The effort has paid off except for those scenes where you see through him that he is trying hard. Like the one where he screams when his sister Devi (Vidya Malvade) and her husband are dead. His screaming seems forced and unnatural. Otherwise, he is good throughout.

Aditya Panscholi as the big bad guy Jaleel is totally mean. Menace drips from all over him. The scar makes him look super-scary. He has pulled out the role of local gangster Jaleel effortlessly.

Nicolette Bird looks like a fresh lily in her role as Noorie. She has made an impression with her sans make-up look. There was absolutely no scope for her acting.

The surprise goodie bag however comes in the form of Ankur Vikal. He keeps the humor alive throughout the film. Can't stop thinking how much he resembled Richard Branson in the film!

Anupam Kher is smart as the genuine cop. Anup Soni is mature and totally fits the role. Vidya Malvade is okay and Seema Biswas is robust. New-face Padmapriya is cute.

The film is not something you'd go with your family on a weekend. But if you want to experience forceful cinema, and have the guts to gulp it, go ahead let this strike you!