As the finales draw closer, the shows get dramatic. The shows this week were surely action and controversy packed, this weekend. Musically, this week saw some of the best performances but the ugly head of controversy was conspicuous in all the shows, totally overshadowing the good performances, thus leaving the viewers outraged, dismayed and totally disheartened. 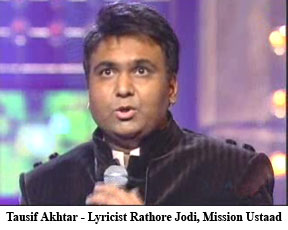 Featured Video
Mission Ustaad now has reached its final stage. This week the theme was “Zarra Socho” and the contestant Jodi’s were asked to sing any song of their choice and tell the viewers what message that carries. It was a thought provoking soul stirring journey. Every Jodi performed briliantly and gave some very beautiful and thoughtful messages. Simone Singh as the host deserves a big applause for anchoring the show with great élan. The perfect show on Friday however had one black spot. The Rathod Jodi lyricist Tausif Akhter came up on stage and questioned the judges’ decisions momentarily disrupting the otherwise perfect evening. This week, there was a tie for the Brahmastra winner, Naresh–Shweta and Kailash-Mahalaxmi. The best part of the show was how communal harmony was advocated by all the contestants and judges together. 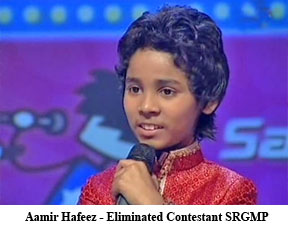 If Mission Ustaad gave out some thought provoking and awesome messages on communal harmony, SaReGaMaPa was way away from just that. Friday was elimination day and this week saw Amir Hafeez getting eliminated. The elimination saw a big hue and cry on the sets with Amir’s family members giving the whole incident a communal colour. But it was sad to see the channel house behaving so irresponsibly by airing the whole saga, especially by airing the behind the set affair which showed most of the controversial part. It is so sad to the outrageous behavior; it was disappointing to see such segregation through religion being done on a musical show, that too in front of a celebrity guest – Ustaad Amjaad Ali Khan, who is well known for his role in spreading communal harmony! The good ambience, the good performances all got marred by the last few minutes’ fiasco. However, on Saturday the electrifying presence of Ajay and Kajol Devgan brought out the fun factor and masti back into the sets and there were some brilliant performances. Best being the theme of love dealt very aesthetically. 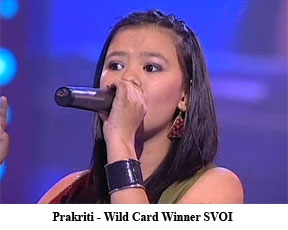 SVOI too was not too far behind when it came to harmony. The show from its onset is somehow propagating regionalism. But barring stray dramatic incidents here and there, the rest of the show was indeed very enjoyable and witnessed some good performances. Prakriti made it back into the team as the wild card entry. The highlight of the show apart from some brilliant performances was Alpansh’s own composition. On Saturday, the kids gave a new face to Himesh Reshamiya’s songs and made the evening surprisingly very enjoyable and the icing on the cake was it was dramafree! On Friday, the Vyom fiasco was a little overboard. The way the show producer interfered and scolded him or the way the host of the show was sidelined by the producer did not gel well with the viewers - what was the need for the producer to throw the weight around and create such a big scene? Vyom’s mother's reaction also was also a little over the top. At the end of the day, why do they forget that it is kids they are dealing with and why put them to extra pressure? 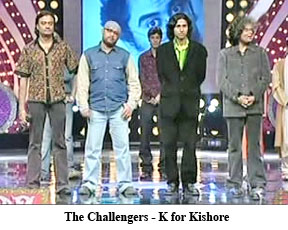 K for Kishore was quite heated up this week as it was the Challenger selection round. From the performances, it can be said that some of the challengers are much stronger than some of the super 6. Even K for Kishore witnessed confusion and uproar this week on whether Amit Paul should be allowed to be considered as a challenger as he was away indisposed. But after much deliberation and discussions, based on previous performance by Amit Paul on the sets of K for Kishore, the judges unanimously decided to select Amit Paul as a challenger.

In the reality shows the prizes are lucrative. But participants and families should learn to take the shows sportingly and realistically, without pinning too much of hope towards the outcome. Reality shows heavily laced with drama has become a regular issue. But when the realities are presented in a dramatic way, the presentation can actually impact a lot more as we saw. Loud behaviour or dignified decorum; TRP gimmicks or respectful sensitivity – what should be presented to the viwers and how much - this is the decision the channel houses need to take soon.

+ 3
13 years ago What happened should not have happened. Amir's family surely has shown us a very ugly real side of a dramatic turn in a reality show. It was one of the most unfortunate moments.I also agree Zee should not have shown the backstage fiasco to the fullest.
However, I have one thing to ask, whether Zee had shown it or not,could Tanmay or Rohan be saved from the stigma of that horrid outburst? did these two little kids deserved to be targetted this way by Amir? Amir had received so much of love and affection from all the parents,they hadn't left him feel lonely when his folks were not there. DId they deserve to see this from that Amir's brother and hear such horrible things about their sons?
Poor Amir. He definitely did not deserve this.His own family let himm down. In fact the amount of hopes they had pinned on Amir's earnings, I am sceptical about if even now Amir receives money from international sources for his education and other welfare, if that money will really be utilised for that purpose and not taken off by the brother to meet the families pressing monetary needs.

13 years ago I absolutely didnt agree w/ anything Aamir's family said. I wish they had taken it gracefully. But yea, AK were awesome on SRGMP...Kads looked so cute =]

13 years ago i agree with what u guys have said abt amir and his family but the judges weren`t fair enought either i mean when it was the elimination day why didn`t they eliminated either vasundhara or rohan bcz they knw a good singer was being eliminated and they stopped it but now wouldn`t the other kids (tanmay and amir) in danger zone want their elimination to be stopped....if u look at it from another point of view their family was a bit right

13 years ago sure i agree with anu.rad.theyw oudl definitely use it and not for the purpose because when theyw ere interviewed how and what they will do they said, uski behen ka shaadi karenge and will buy gaadis for living, it was such an illiterate act on the sets which was really bad, if they cannot accetp reality, they should not come to these shows

+ 3
13 years ago This week SRGMP saw the worst episode ever!! It was so disgusting to watch that fiasco created by Amir's family more disgusting than the love drama created by Himesh!!

Amir's brother reaction was really irritating and more irritating were the background noise created in the name of special effects!! Was it needed? Why channel house had to show all the backstage drama?

The way those people were shouting and dragging Amir was ridiculous.. I pity upon that guy, he couldn receive a proper farewell also!!

Ek acche bhale show ko kaise khabad khaana bana diya in logon ne!! The episode was classical music special and these people along with the channel house, I feel have insulted music!! I hope Maa Saraswati is not angry over them!!

My blood is still boiling but would put a stop here!!

+ 3
13 years ago This is real sad that Zee showed what happenened In saregamapa. They could have handeledit better.

And mind you Sonu left the show when Gajji insulted him. Reason why Gyan too left. It was when Gajji did the same with Chandra he himself got kicked out. So here Thaali mein chhed does not come. But yes what Aamir's family did do fall under that muhavra.

13 years ago What happened on the sets of Lil Champs on Friday is most unfortunate... The family of Amir just showed their 'class'.. Amir stands out to be clear loser to be born in this family.. Now, I can more than understand why his singing also lacks the finnesse!!

And it was pathetic on the part of Zee to dramatize the issue so much just for the sake of TRPs... What happened to all their so-called 'clean' drive, and what happened to Sonu? Wasnt he the one who was preaching all sorts of things this while... I guess he has some serious retrospection to do!! And what was it abt his 'classically mild' music video... It was seriously *eew*! Who is Sonu's inspiration there - HR, SRK or the other Khan? I wonder! That one video has totally put me off to even listen to the album anymore...

Performance-wise, I personally thought that Rohanpreet stood out from the rest.. Anamika attempted a very tough song, but exposed her limitations... Tanmay seems to have lost his focus and concentrating more on his company now... I will not mind if Rohan wins the contest now - he seems to be most humble with a very pleasant attitude... Singing wise, he is as good or bad as Anamika... All the best, Rohanpreet!

In VOI, coming back of Prakriti was almost predecided, and yet I feel sorry for Areeb/Geetashree... Friday episode theme was good, the song selection was not as good... Again - Anwesha gave a rocking performance... The drama surrounding Aishwarya was uncalled for! Vyom definitely did not deserve the preferential scolding from Gajji... IMO, Saturday was a real 'let-go' theme for me.. but all the kids gave very very good performances... I think all of them were 9 up! Probably, the fact that HR was not there helped the kids to sing without interruption.. and Thankfully, there wasnt much drama too in the Saturday episode :) But, too much of re...