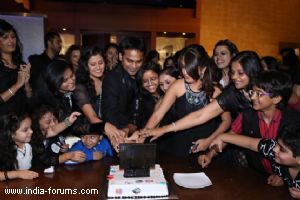 Stars shone bright at the India Forums 10th Anniversary party last night. The first amongst the actors was Gautam Rode who came early, settled himself with friends and then stayed back for a long time mingling with them. The actress Prerna Wanvari who was looking stunning in her simple once piece black attire made an entry just 5 minutes later than the actor Gautam Rode arrived.

Adding more in the list was Telly town's cool hunk Siddharth Shukla who is a fitness freak had to go to the gym the next morning but yet he made it a point to come to the party and enjoy. He was accompanied by Vipul Gupta who was seen mingling with his co-actress Esha Kansara. It was only after Vipul left since he had an early morning shoot that Esha was seen with good friend Siddharth Arora giving her company till the end.

The lovey dovey couple Gurmeet Choudhary and Debina Bonnerjee Choudhary despite of being caught up with their Nach rehearsals made a dazzling entry and bumped into a bunch of kids at the entrance and the fact that Gurmeet loves kids was apparent from the way he picked up and cuddled the kids even as he kept the photographer waiting. 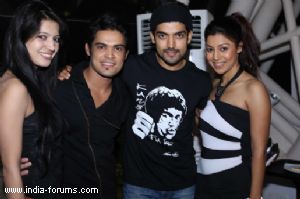 Sachin Shroff accompanied his pretty wife Juhi Parmar Shroff who is rarely seen at parties since her baby is still small. The couple was seen having a good time together with friends.

The irresistible Gaurav Chopra despite his hectic schedule dropped in for a while to wish India Forums.

The mood of the party got enhanced with the presence of ace actors Asheish Roy who was busy shooting for his show and his plays made it a point to make it at the party and enjoyed to the fullest. Also Papia Dey looked stunning in her black attire with Bling.

The pretty actress Rishika Mihani and Munisha Khatwani made their presence felt at the party midway by following the theme of the party and were seen enjoying the party at the fullest. The very well known as Pihu a.k.a Fenil Umrigar was seen shaking a leg at the dance floor and dancing her heart out along with Vrinda Dawda. The other actors joining these two chicks at the dance floor were Shakti Arora and his girlfriend Neha Saxsena, Sapna Pabbi, Vishal Singh, Karan Tackar, Krystle Dsouza, Siddharth Arora and many more who enjoyed it thoroughly.

Young lads like Mahima Makwana, Aanchal Munjal, Priyal Gor and Sana Khan who are good friends were seen sharing some good talks after a long time as we know that the busy hectic schedule of the television industry does not allow them to meet often. It seemed as a great get together for them at the party.

Also seen at the party was the dashing actor Shaleen Malhotra aka Arjun who entered the venue bit late but was seemed to be enjoying the party a lot. Other actors like Mrunal Jain, Sheetal and Ritu were having a great time at the party too. At the end actor Viraf Phiroz Patel and Amrin Chakkiwala were seen having a candid chat. Also the on-screen couple Ishita Dutta and Rahul Sharma, who though were tired shooting the whole day made it a point to come and attend the party. 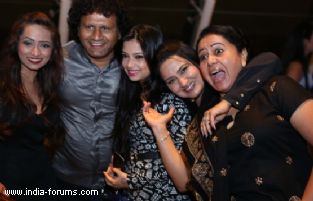 It seemed as if the party was incomplete without the fun loving Rathi Parivaar of the top ranked show Diya Aur Baati Hum. The actors of the team right from Neelu Vaghela, Arvind Kumar, Ashok Lokhande, Pooja Singh, Urmila Sharma, Gautam Gulati, Varunn Jain, Aryan Sharma, Harshali Zine who were enjoying the party and dancing their heart out on the dance floor.

Talking of friends, director Swapna Joshi Waghmare was more than happy to meet actor friends she had not met for long! Even producers like Asit Modi, Sudhir Sharma and Yash Patnaik added glory to the party.  Well- Known designers Riddhi -Siddhi and Mapxencars also joined in at the party!!

This wonderful occasion was spent enthusiastically with these TV stars making the party a successful one!!

NatalyMusketeer 5 years ago Siddharth Shukla...keep smiling, keep rocking...you're simply the best, better than all the rest!

Harman987 6 years ago Damn Shaleen was bit late
I always thought he was punctual about time, but I also do understand shooting for Arjun is hard.
Love u Shaleen
You are the best
Keep smiling

pimon 6 years ago We Know U Like Party Just Like Crazy, Thanx for going This Party enjoying This Party , U entered the venue bit late but this is no matter.Thanx Once Again Shaleen Malhotra Bhaiya.

Zarina Wahab was Tested Positive for COVID-19; Actress ...
7 minutes ago

Ashalata Wabgaokar passes away due to COVID-19
9 minutes ago