Star Plus which tags itself as an inseparable part of each-other's family; 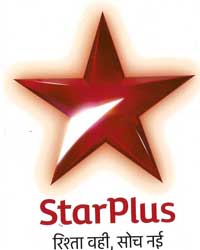 on the eve of completing 10 glorious years in Hindi television and with a view to deepen it's bond with the viewers the channel has decided to feature a refreshed Star Plus logo, the Ruby Star and a new perspective.

On this significant occasion, Uday Shankar, CEO Star India Pvt. Ltd said, "It gives me pleasure to announce the refreshed brand for our flagship channel. India has always been a land of new thinking so we drive to revive the convention through refreshed brand promise 'Rishta Wahi, Soch Nayi' (old relationship, new thinking). We are committed to entertain our viewers with content that propels them in a new direction."

The new logo ruby star which beckons viewers to enter the crystal world of Star Plus is scheduled to debut on June 13th with the Star Parivar Awards 2010.

..Sana... 8 years ago why did they change the logo??the old one is way better..it has sooo many memorys...kis desh mein hain mera dil,kahin to go and the list
countinues!

Luv-Shonit 10 years ago The blue logo was soooo much better. Don't like the new logo but the adverts for the soaps looks quite good.

smiley121 10 years ago blue or red.we watched star plus only for kanjali.bring our kanjali back.

For replacing good shows with crappy ones, the viewers have

given Star Plus the RED CARD, that is why the new SP logo is RED.!! LOLZ.

ffkhan 10 years ago Dunno why they changed the logo. Is there any problem wid the old one?