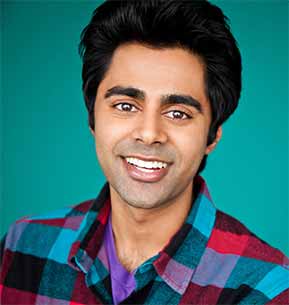 Los Angeles-based Indian American Hasan Minhaj, who discussed a range of subjects with Indian and South African comedians on travelogue show "Stand Up Planet", says the best aspect about people in his profession is that they can "tell the truth and not get fired for it".

On the two-part show aired on NDTV Prime, Minhaj follows the jokes and personal experiences of international comics on some global issues ranging from social and economic disparity, religion, political corruption and censorship.

Do comedians like him stand a good chance to say things as they are about certain serious issues, which, if said by another celebrity, could irk different sentiments?

"Because we're performers onstage we don't have to tow any specific lines for a political group, corporation, or religious group. We can truly speak our minds and we have immunity from being criticized because at the end of the day, it was just a joke," Minhaj told IANS in an email interview.

For the show, he met comedians in India and South Africa.

"We follow the jokes into their lives and show that a lot of the 'jokes' you hear on stage aren't contrived puns that you make up in a joke book, it's real life.

"Following the jokes in new comedy scenes, allows us to look at some of the world's toughest issues using a great new narrative (stand-up comedy),"

"India and South Africa have some of the fastest growing comedy scenes right now. so we decided to focus on those two countries in the documentary," he said of the show, the first part of which was aired May 17, and its second part Saturday.

Minhaj, who clearly states he's "not related to Nikki (Minaj)", comes from a family from Aligarh in India. But he was born and raised in Davis, California. His family now lives in Delhi.

The 28-year-old's tryst with stand-up comedy started nine years ago when a friend introduced him to a Chris Rock standup special.

"I decided to take it up full time. I drove down to my local comedy club in Sacramento (US), signed up, and I've been doing it ever since. Stand-up for me was one of those mediums where I could tell the truth and not get fired for it. That's what blew me away.

"All those things I wanted to say to my teachers or employers I never got to say, but suddenly with a stage and microphone it all of a sudden becomes appropriate and acceptable. That's what drew me to the art form and still inspires me to create and be passionate about the medium today."

What are the traits of a good comedian?

"Honesty, having a strong point of view, and being authentic on stage," he said.

India is going through a new phase as far as stand-up comedy is concerned - artistes are gaining more visibility and also, live shows are gaining an audience. What do you believe can propel the popularity?

"I think as the comedians continue to grow and evolve and gain more exposure in other mediums (film, television, podcasting), it will bring more attention to stand-up comedy as a live art form and more and more people will come out to the shows," said Minhaj.

He himself hopes to perform in India.

"I would love to come back and perform with all the comics I've met in India. Tanmay Bhatt, Rohan Joshi, and Aditi Mittal are the best. They're going to be huge stars, so hopefully I can open for them," he said.

After revealing relationship, Shireen Mirza gets proposed by boyfriend ...