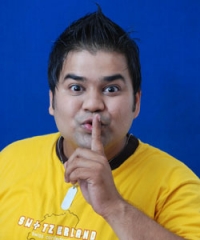 Prasad Barve who was last seen in Dill Mill Gayye as Dr. Jitendra Prasad is all set to enter Imagine's Zor Ka Jhatka as a surprise package! The actor is presently seen in Star Plus' Pyaar Main Twist..

A source says, "Prasad Barve will enter Zor Ka Jhatka in tomorrow's episode, and he holds the distinction of being called to the show thro' Shah Rukh's Sifarish".

We hear that SRK believes that Prasad is the only contestant who can give a Zor Ka Jhatka to the hefty Gracious D'Costa. Can Prasad live upto the expectations of the host? That's for the viewers to find out..

We contacted Prasad Barve and he confirmed, "Yes, I will be entering in the show as a surprise package; viewers have to watch to know more (smiles)".

Taking the chance, he conveys, "I won't lose the chance to convey this to all my DMG fans that I badly miss Dill Mill Gayye".

Tune in to tomorrow's episode to see Prasad in action..

10 years ago Parsad is really sweet...hope he really does well.
We really miss Dill mill gayye too!

10 years ago Isne to Shshrukh ka naam duba diya...
Could not complete the Kamartod qualifier on the first day...

10 years ago such a boring show...i like shah rukh but in this show the focus shifts from the tasks to SRK's commentry....boring