View Profile
Despite the recent commercial success of his sci-fi flick, Shah Rukh Khan is not a happy man as he finds himself in a tricky situation with India's money laundering agency.

The actor and co-owner of the IPL team Kolkata Knight 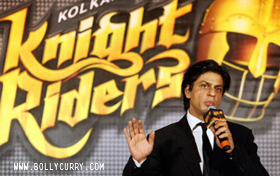 Riders was reportedly quizzed for 6 hours earlier this week by the Enforcement Directorate in regards to money laundering allegations against Indian Premier League Team 2.

The IPL is currently worth over $3 Billion (USD) and has become a glamorous platform following investments from B-Town celebs such as Khan, Shilpa Shetty and Preity Zinta.  However with allegations of "black money" investments chasing the fame, IPL has become synonymous also with controversy, leading to promoter Lalit Modi and several team owners to be in the spotlight for questioning.

SRK has currently been asked to provide details of advertising, profit and loss, share holding and the buying his players within the next two weeks.

What with a mixed critique on Ra.One, active promotions for Don 2, and now this fiscal fiasco on the IPL front, SRK sure must find his recent birthday wish to relax, a farfetched hope at the moment!