View Profile
Debut producers Zayed Khan and Diya Mirza have been throwing claims of having a surprise package for their film. 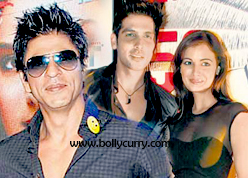 The surprise turns out to be none other than having Shahrukh Khan do a cameo role for this film of theirs.
While at first Zayed wanted his brother-in-law Hrithik Roshan to play the cameo role, since dates couldn't be matched up, Diya suggested that they request SRK. Having worked with the actor plays in favor for these two because SRK keeps a high regard for friends.
Also working in both producers favor is the fact that SRK and Hrithik are very good friends. Along with that, SRK's wife Gauri Khan and Hrithik's wife [and Zayed's sister], Sussane are really close friends. With that said, it would've been difficult for SRK to say no to these two.
SRK will be finding time from his busy schedule that consists of working on the post production of Ra.One to fit in three days of shooting with Zayed and Diya.
We have to say, friendship in B-Town seem to have it's benefits. Here's hoping these two new producers find much success!