View Profile
At a recent awards ceremony held at the Yash Raj Studios, the Baadshah of Bollywood, Shahrukh Khan, gallantly played referee between one of Tinsel Town's biggest rivals, Kareena Kapoor and Priyanka Chopra.
It was heard that both actresses were signed during the same time slot to shoot for their performance. Priyanka's presentation, however, took a tad bit longer than scheduled which inevitably kept Kareena waiting outside till PC's act wraped up. As Kareena slowly paced with wait, patience slowly started to wear down to it's thinnest until a blow off point where the size zero babe decided to stage a walk out. 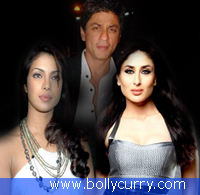 It was then when SRK stepped in to cool things down since he was also rehearsing at the same venue. As soon as he heard of the tiff, he made it a point to settle things down between his two favourite leading ladies. SRK cleverly suggested to Kareena that she should go and return to shoot for her act the following morning instead of completely giving it a miss. Although Kareena had to fly back to Pune as soon as possible to shoot for her movie Bodygaurd, the Kapoor girl holds SRK in the highest regards thus feeling obliged to heed to his advice.
While Kareena shot for her performance the next morning, SRK informed Priyanka about the former's sacrifice and suggested that she too should reciprocate to Kareena the friendly gesture. This resulted in the high moment where Priyanka let bygones be bygones and approached Kareena, giving her a huge hug before leaving for the day.
Looks like the season of patch up in Bollywood! Here's hoping the once fomer buddies rekindle their friendship.
Author: Amisha L.
Editor(s): Hershi & Jenifer.
Graphics: Pooji.
22 Likes