View Profile
Even the King gives in to the ever glamorous Rekha's demands! For her performance at the The Karbonn Mobiles 17th Annual STAR Screen Awards, Re 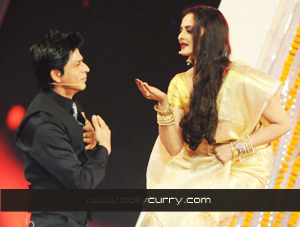 kha insisted that SRK help her rehearse two days before the event. SRK being a true gentleman ensured that he gave enough time for the rehearsal with the diva. Sources said that the duo was so engrossed in the rehearsals at the venue of the award function that Rekha made Kat wait for almost 5 hours to take the stage! Rekha, known for her charm & charisma, did make up to Katrina by complimenting her on her belly dancing moves and also requesting her to teach a few steps from Sheila Ki Jawani. Soon the two actors were seen happily shaking a leg on Sheila!

The Karbonn Mobiles 17th Annual STAR Screen Awards will be full of surprises this year! Living the promise of 'Is baar hoga wohi, jo socha nahi', the first and the biggest film awards ceremony of the year will air on 22nd January at 8pm only on Star Plus!
0 Likes

Kangana Ranaut is in Awe of Yogi Adityanath; Applauds his ...
22 minutes ago

Farhan Akhtar is excited to kick-off the opening match of ...
29 minutes ago

Arjun Bijlani on music video with Reem Shaikh: I feel Ishq ...
49 minutes ago