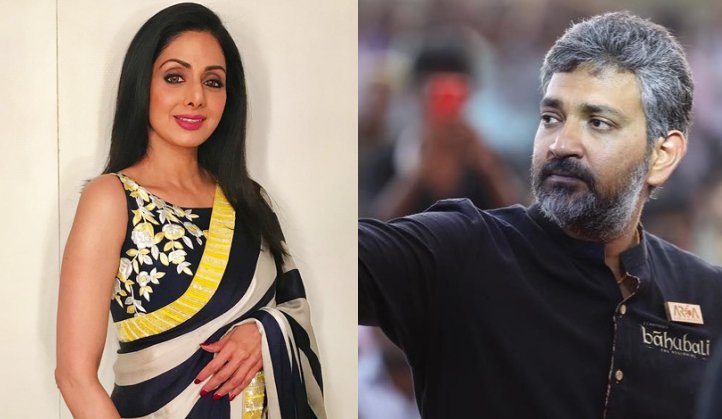 Bollywood actress Sridevi is hurt by the statements made by Baahubali director S. S. Rajamouli over the role of Sivagami Devi being offered to her.

Sridevi didn't talk much about her rejecting the role of the iconic character of a grand Baahubali, Sivagami Devi. But, it seems, the question about why she rejected the role will haunt her forever. Recently, during the promotions of her upcoming film MOM, same questions was being asked to her.

In a recent interview with a Telugu channel, she said it all. She opened up about how she felt about the whole issue. She said, "I could not be part of many films in my career due to various reasons. But I don't know why only this film is being talked about. Baahubali part 1 and part 2 came out and both became big hits. And I don't understand why people still talk about it." (sic)

She added further, "I have avoided talking about it for a long time. But, once and for all, I want to clear the air. There are rumours that I asked about Rs 10 crore for the role, including an entire floor in a hotel and 10 flight tickets etc." (sic)

Asking how someone can manufacture such news she said, "I have been in the industry for about 50 years and acted in more than 300 films. Do you think I could have accomplished all of this by making such demands? People in the industry would have sent me packing if I was like that. But, when you hear such things about yourself, you really get hurt. I don't know if the producer wrongly told Rajamouli that I made all these demands or there could have been some miscommunication. I think it is not in good taste to speak on a public platform like this." (sic)

She then elaborated when she got hurt, she said, "I never took anything about this matter to the heart. But, I saw a Rajamouli interview and I was shocked and hurt by it. I have heard about Rajamouli, he is a calm and dignified person. I have seen his movie Eega and was very happy to work with him. He is a great technician but the way he spoke about the issue made me feel very sad." (sic)

The Mr. India actress slammed all such rumours saying that even she knows about the 'payment' as she is also a wife of a producer. She said, "My husband is also a producer and he knows the problems of a producer. And he would have also not made such demands." (sic)

Well, tell us what do you think who could have been the best choice for the character of Sivagami Devi, Sridevi or Ramya Krishnan?

Ramya Krishnan's Comments on Kangana Ranaut: 'She is a Gutsy, ...

Viji79 3 years ago Not commenting on the controversy. But I am happy that ramya krishan played sivagami. I cant imagine anyone else in that role.

AshVarna 3 years ago Every actor has right to accept or not to accept a film. If Sridevi has rejected a film why are we making a big deal out of it. Its no crime to reject Bahubali. I am glad she finally decided to speak. Instead of controversial remarks Rajamouli should have said things didn't work out with Sridevi, period!

Though i'm not a fan, had to accept she is an accomplished actress across all industries with a legion of movies to her credit. And she has every right to quote certain amount, whoever finds it suitable will cast her. That is how industry works. I just can't understand why this is blown out of proportion with people making derogatory comments on her looks, choices ...blah blah.

littlesmile 3 years ago Well Sri is BW actress now so she is behaving like one making unreasonable remuneration and showing starry tantrums.She missed Bahubali and did crap movie like puli in Tamil only coz of remuneration.Rajamouli definetly didn't lie about this.She is upset that truth came out and she is being shown in bad light by media.

darshana23 3 years ago Sorry for Sridevi's fan...But i dont understand from which point of view she was opt for Shivgami's character?? She wouldnt have been close to 10% of what Ramya krishnan had delivered...

BettyA1 3 years ago She might've demanded high salary as a way of getting out of that role, maybe she wanted to avoid working in that movie

poppinss 3 years ago She did do something similar with a Tamil movie.
Bahubalis nationwide success was unexpected... Since she became a big star in Hindi industry she has acted in very few regional movies. And that too for hefty packages and high demands. Can't blame her either... she is an actor cashing in on her popularity. Will that set the BO ringing is another question.