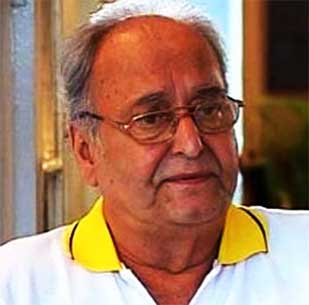 Veteran Bengali actor Soumitra Chatterjee turned 80 Sunday with fans and well-wishers celebrating the day amid a special line up of exhibitions and plays.

Congratulations poured in through the day for the thespian, who starred in 14 celluloid classics of Satyajit Ray.

Equally at ease in films and on stage, he is renowned for his elocutionary prowess and last year, his doodles and sketches were also exhibited.

Bengali superstar Prosenjit who considers Chatterjee his "uncle" tweeted: "Happy Birthday to Soumitra Kaku, my guardian, philosopher and father. many happy returns of the day."

The actor flagged-off the celebrations at the Academy of Fine Arts here.

As part of the evergreen hero's birthday plans, three plays, written by Chatterjee, were staged by the creme de la creme of the Bengali film industry.

Daughter Poulami Basu was responsible for organising the theatrical treat, a birthday ritual for the master. Chatterjee, himself featured in one of the plays, a proof of his undying love of the craft of acting.

Ray's son, Sandip, also a filmmaker, inaugurated the art exhibition that showcased paintings of the actor by famed artists like Jogen Chowdhury, Suvaprasanna and by Ray himself.

Besides Ray, his work with filmmakers Mrinal Sen and Tapan Sinha also earned him critical acclaim.

The Dadasaheb Phalke Award winner for 2011 has received numerous international honours, including Ordre des Arts et des Lettres, the highest award for arts given by the French government.

Sanjay Choudhary Attacked By Goons; To File a Police ...
30 minutes ago