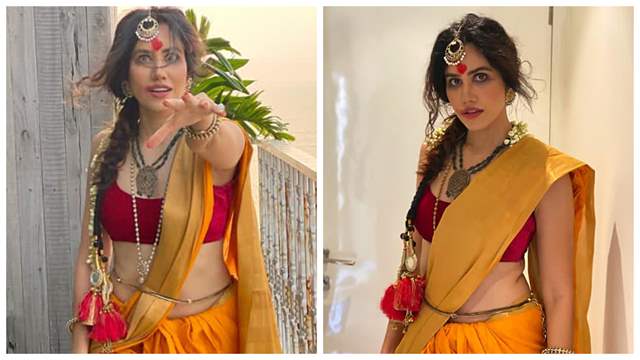 Halloween is celebrated extensively in the West, but of late, it has picked up in India, too. People often dress up as scary characters. While the social media was flooded with popular names from the country donning scary western looks, actress Sonnalli Seygall decided to give Halloween a desi twist. She dressed up as Vidya Balan’s popular character Monjolika from Bhool Bhulaiyaa.

The actress also wanted to dedicate her look to Vidya. “The reason for opting for Monjolika was also because of my love for Vidya Balan. She has always been a huge inspiration. It was fun playing with a character that she portrayed so beautifully in Bhool Bhulaiyaa. The response that I got was overwhelming and unexpected. It’s ironic that when I stepped out as an Indian scary character, people were surprised to see me in a desi look. I’d love to try this look during Halloween in the West someday,” says Sonnalli.

The actress enjoys Indian outfits and she wanted to do something unconventional this Halloween. She says, “People are used to seeing me in glamorous and leisure wear. And they are not used to seeing me in Indian wear so often. I personally love Indian clothes, I thought of donning the Indian look for Halloween, considering Diwali is also around the corner.”

TV Celebs spook everyone out with their Halloween looks