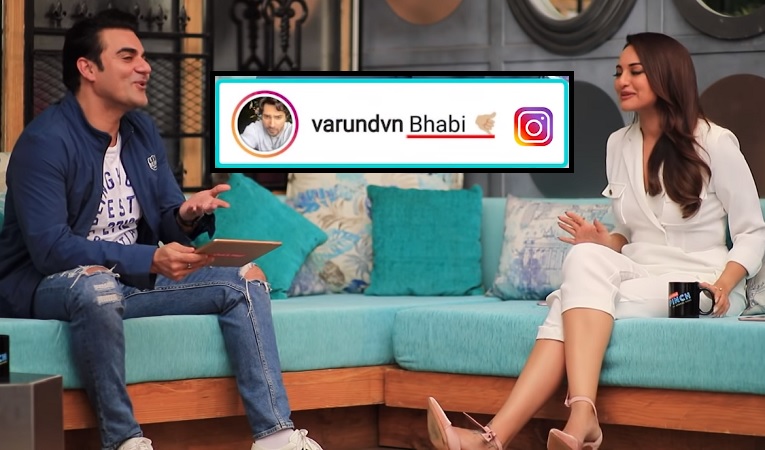 After Kareena Kapoor Khan's hard-hitting episode, QuPlay has released another interesting episode from the first if it's kind chat show, Quick Heal Pinch by Arbaaz Khan. The unique concept witnesses Arbaaz Khan talking to Bollywood stars and discussing their social media interactions.
The second episode of Pinch by Arbaaz Khan was unveiled today and the special guest on the show was actress Sonakshi Sinha who opened up about how she deals with negativity on social media and how she combats trolling.
The episode witnessed Sonakshi revealing many interesting facts about her social media usage and while playing a quick game, Arbaaz asked Sonakshi, "What was your last comment or reply to someone on social media?"
To this, Sonakshi revealed that she had replied to Kartik Aaryan and Varun Dhawan.
Recalling the incident, when Varun Dhawan addressed Sonakshi as 'Bhabhi' (sister-in-law), Arbaaz asked her, "I read somewhere that Varun called you Bhabhi and we want to know why."
Sonakshi laughed off and said, "Varun pagal hai (Varun is mad) and I want to declare this because he is mad and he has no ... will leave it."
This season of Quick Heal Pinch by Arbaaz Khan has 10 episodes of approximately 20 minutes each and will be streamed online once a week on QuPlay's YouTube channel. The show is written and directed by Abbiy Obheroii.
Other celebrities on the chat show are Karan Johar, Kapil Sharma, Sonam Kapoor, Nawazuddin Siddiqui, Sunny Leone to name a few.
Watch the episode here:
Featured Video
&feature=youtu.be