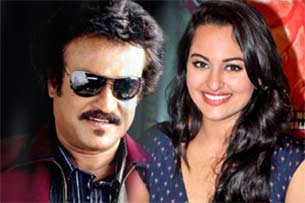 Actress Sonakshi Sinha, who is making her southern film debut with megastar Rajinikanth-starrer "Lingaa", says she was nervous about working with him.

On her experience of working with the icon, the young actress said: "He is a wonderful person. I may not have seen many of his films, but I remember him from 'Hum'. I used to really like watching that film."

Sonakshi found him to be extremely humble despite his star status.

She recounted: "The first day when I met him on the set, I went up to him and told him, 'It is such an honour to work with you, sir', and I said, 'I am very nervous'. So he said, 'Why are you nervous? I should be nervous because you are my friend's (Shatrughan Sinha's) daughter."

That conversation turned out to be the ice-breaker between the actors.

"I couldn't have asked for a better debut (in the southern film world) than this. I am very happy," said the excited actress, who is currently busy promoting her forthcoming Bollywood film "Holiday: A Soldier Is Never Off Duty".

One thing that Sonakshi realised is that Rajinikanth's professionalism and humility is because of the respect he pays to his fans.

"He is very professional. He is such a huge star, yet he is so humble and speaks to everyone so politely. Once he goes out of the set, he is always surrounded by his fans and he makes sure that he rolls down the window and greets them.

"This is the reason he is such a huge star. The amount of love he gets from his fans, he reciprocates it. That's amazing."

"Lingaa" is directed by K.S. Ravikumar.

Shatrughan Sinha opens up on entertainment industry being ignored in ...