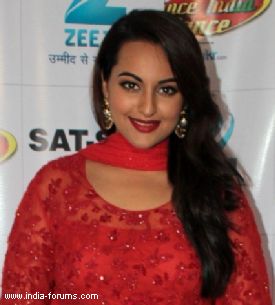 Actress Sonakshi Sinha, who garnered appreciation for her performance in Vikramaditya Motwane's "Lootera", is unhappy that the film failed to get nominated for this year's movie awards.

The actress took to Twitter to share her disappointment, adding that the film had received enough appreciation for it to be nominated.

"Disheartening how 'Lootera' has been held back from most of the nominations this year. Didn't they call it a masterpiece, poetry in motion, world-class and technically superior film when it released? That seems like qualification enough to be out there," Sonakshi tweeted Wednesday.

The period drama, which also featured Ranveer Singh in the lead, received a mixed response after its release.

Although the actress has been nominated in the Best Actress category for the 20th Annual Life OK Screen Awards, she felt "out of place" as no one else from the film was nominated.

"Not nominating Vikramaditya for Best Director, Ranveer for acting, Amit Trivedi for music, (Mahendra) Shetty for cinematography, Aditya (Kanwar) for art, Subarna (Ray Chaudhuri) for costumes, Amitabh (Bhattacharya) for lyrics makes my nomination feel so out of place," she said.

Sonakshi said she is proud of the film, irrespective of whether it wins awards or not.

"...this is a very special film, (I) will always be proud of 'Lootera' whether or not they acknowledge us," tweeted Sonakshi, who has been seen in films like "Dabangg", "Rowdy Rathore" and "R...Rajkumar".