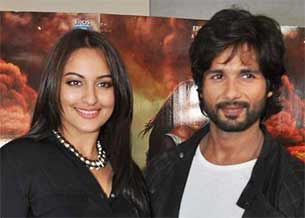 Rumour mills are at it again and the target is Sonakshi Sinha, but the actress is not taking it lightly and shoots down reports about dating her "R...Rajkumar" co-star Shahid Kapoor.

Miffed with the yapping tongues, the 26-year-old said "it is like I can't move out... you connect me to him!"

"I can't remember the last time I met him or spoke to him. It's like if I step out of my house, the news come out that I have stepped out to meet him. It's quite annoying," she added.

The "Dabangg" star comes from a film family and says it's like a boon as they are used to such gossip.

"No they haven't reacted to any such reports, they are used to it," said the daughter of actors Poonam and Shatrughan Sinha when asked about her family's reaction to link-up rumours. Her two brothers Luv and Kush are also part of showbiz as actor and director respectively.

"Luckily, my family knows me and if anything as such would have happened, they would be the first ones to know. But they don't react to all this," said Sonakshi.